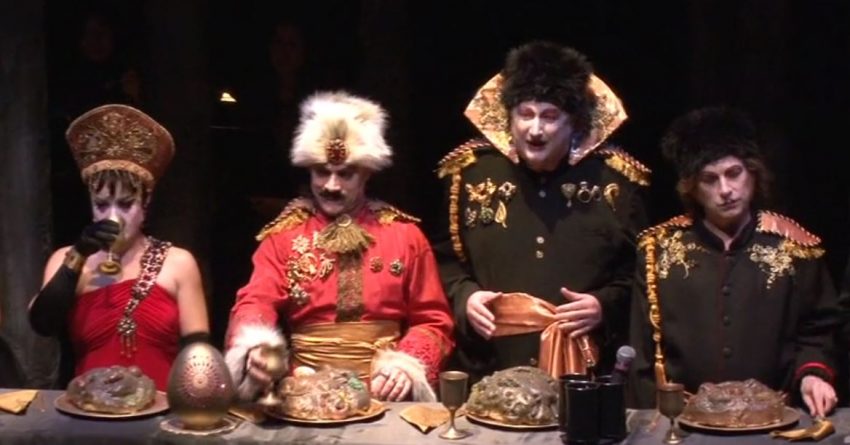 Shotgun Players’ original 2011 production “Beardo” takes us on a musical trip—an indie rock opera, called a Songplay. I would have loved to see this genre-bending musical live, but the digital version is a joy. Dissonant songs sustain electric energy, as comedy, lust, and corruption rule the failing Russian dynasty–it’s Rocky Horror on steroids.

Beardo (mezmerizing Ashkon Davaran) is based on the notorious Russian mystic Rasputin, is a self-proclaimed holy man, who enthralled the royal Tzar and Tsarista. Playwright Jason Craig whips up a nomadic bad boy peasant who seduces uptight counts and countesses.

As Beardo, super-charged Davaran channels piety, poverty, and playboy cunning to hoodwink rich and poor. In “God Juice,” he shares his fear of voices in his head “when God comes knocking.” Taking control of the red-robed Tsar (hilarious Kevin Clarke) and Tzarista (stunning Anna Ishida), Beardo enthralls the clueless court.

He sings to Saint Peter: “I thought you got my back,” expressing boundless confidence and then, doubt: “Now show that red nose and those red horns.” Beardo mystically heals their hemophiliac son (dynamic Juliet Heller), then seduces all the willing court ladies.

Edgy, XXX-rated Beardo rises from mad peasant to mystical prophet.  Although we find Beardo lying in the dirt wearing only a dirty rag, by the time he arrives at the royal court, he wears his trademark black tunic.

As an “outsider,” Beardo shrewdly negotiates and blackmails his entry into elite political circles. He dances a sultry tango with the Tsarista,, unleashing her sensuality. Beardo leverages his sexual influence into control over the Romanov court, turning the Tsar into his Pavlovian, lapdog with manipulation and a bar of chocolate. His sensuality challenges poor and rich–as the peasants respond with a beautiful chorale in harmony.

Designer Christine Crook gives us over the top costumes, each with gowns radiating garish arrogance.  The Queen’s red gown resembles Alice in Wonderland’s “Queen of Hearts” as does her personality.

Director Patrick Dooley has the many characters stepping forward to share their stories, in Malloy’s surging music. Craig pulls together pieces of history to show a country torn between haves and have-nots–as we are, today.

We see that extremes of wealth and poverty lead to tyranny and death. In the tragic 20th Century, Russian workers and rulers grow further apart, making revolt inevitable—with Beardo as the eager catalyst.

We are still subject to Beardo’s seductive music and trickery–but without belief. Spend two hours with Shotgun’s rock opera—it’s gripping, sexual, and hilarious. 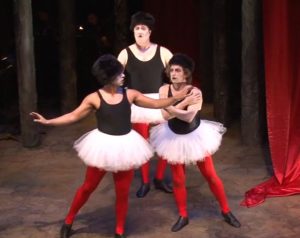