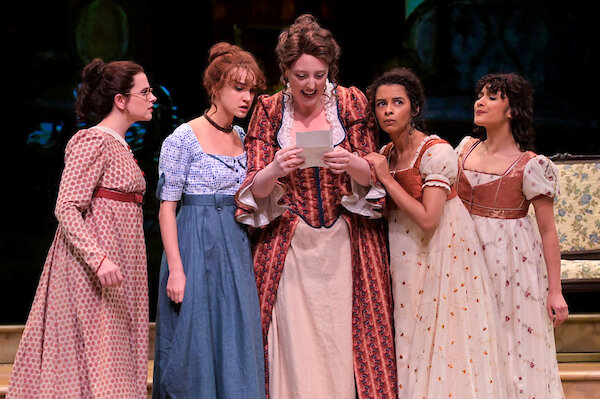 I have an embarrassing confession to make: I had never read or seen Jane Austen’s Pride and Prejudice. I know my reviews suggest the wry wit of a well-read savant, but, in truth, there are gaps in my scholarly repertoire.

Granted, I have seen Bridget Jones’s Diary several times so… you decide whether that adds or detracts from my critic’s cred.

But now, through the miracle of streaming theater, I have seen the light! At TheatreWorks Silicon Valley, Director Robert Kelley’s appreciation and love for Austen’s seminal masterpiece shines through in the brilliant “Pride and Prejudice: A New Musical.” Kelley’s extraordinary cast and delightful design both excite and triumph.

Artistic Director Kelley, with 50 years of experience, fills the stage with sensuous movement, making every moment a visual feast. An opulent set design by Joe Ragey, with velvet and silk costumes by Fumiko Bielefeldt, instantly transport us to England’s just blossoming Romantic Era.

The new musical suffers only from Paul Gordon’s forgettable score. Up against Austen’s clever word play, his lyrics fall short. Like paragraphs randomly set to music, they lack memorable melodies, though the experienced actors do great work with what they’re given.

Every single cast member brings the heat, making lasting impressions in roles large and small. As the aloof sister Mary Bennet, Melissa WolfKlain glowers and delivers deadpan one-liners that cracked me up.  Likewise, Heather Orth’s side-splitting hysterics as the mothering Mrs. Bennet, make me wish for her in every scene.

And who can resist Lucinda Hitchcock Cone, hamming it up as haughty Lady Catherine De Bourgh, backed by a regiment of dutiful servants. Her song stands out, as she smugly pontificates on courtly manners. Truly, I could spend the entire review covering the wide range of talent in the brilliant ensemble.

Of course, you’re dying to know about Elizabeth Bennet (breathtaking Mary Mattison), Mr. Darcy (irresistible Justin Mortelliti), and their delicate romance. Being completely new to Austen, I loved their sharp minuet. Mattison and Mortelliti’s natural, engaging chemistry makes Lizzie and Darcy’s “will they, won’t they” dynamic a refreshing relief from our modern woes.

Mattison’s powerful voice, with its Broadway timbre, reinforces Lizzie’s sharp wit. Like us, Darcy is completely enchanted, his disdainful façade falling away to reveal a lovelorn softie. Mortelliti peels away Darcy’s layers, equally convincing as a shrewd aristocrat and a generous patron.

TheatreWorks’ “Pride and Prejudice” will charm lifelong Austen fans and capture new ones, like me. Whether reacquainting yourself or trying something new, take advantage of streaming theater, and enjoy the great Robert Kelley’s farewell achievement.

“Pride and Prejudice: A New Musical” –book, music, and lyrics by Paul Gordon, based on the novel by Jane Austen, directed by Robert Kelley, at TheatreWorks Silicon Valley, streaming now.  Info: streamingmusicals.com