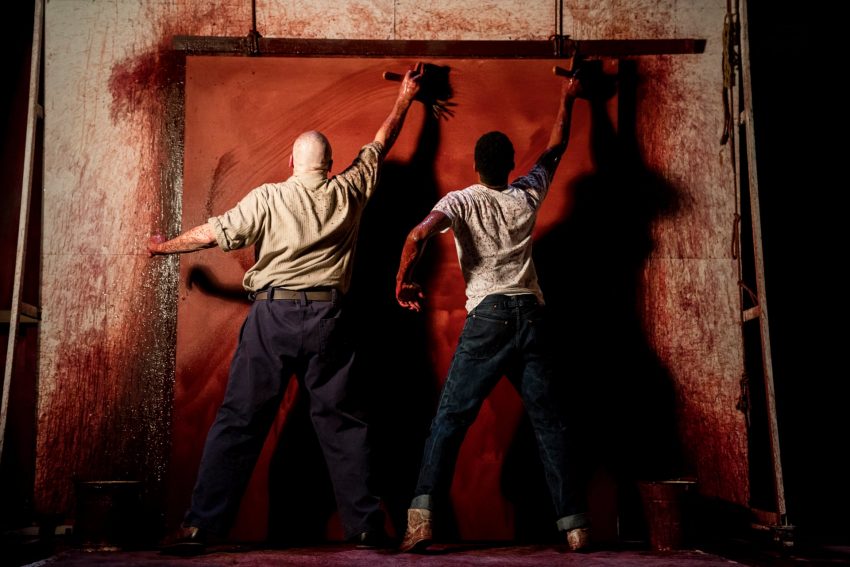 In John Logan’s “Red,” Rothko yearns to see his expensive paintings hang in the Seagram’s Building in New York City, judging the posh diners. Rothko received a $35,000 commission in the 1950s, an artist’s dream.

Dynamic Molina makes a powerful impact on my small screen. Standing statue still, his Rothko commands our attention as he scrutinizes the room-sized canvas.

When Rothko’s new intern Ken (impressive Alfred Enoch) enters, he is taken aback by the great artist’s inquisition: “Have you read Yeats, Freud, Jung, Nietzsche’s The Birth of Tragedy?”

After Ken admits to reading only about art, Rothko rattles off a list of chores, then asks Ken, “What do you see?” Intimidated, we join Ken staring at the wine-red canvas. We, too, become Rothko’s reluctant students, and wonder if “Red” comprises a series of intellectual lectures on art.

Molina’s dominant Rothko demands our attention with his exuberance and passion for art. He senses his pieces breathing, alive, and giving each other companionship.  He exalts in his ability to create, signified by red for life, and black for death. The painter believes that “Black will swallow the red,” the tragedy that awaits us all. His work grows darker as he paints.

The classic conflict between Reason and Passion, Apollo and Dionysus, is mirrored by gentle Ken and belligerent Rothko. In their intense debates, Ken embraces the Pop art that Rothko abhors. Ken further argues for Pollock and Warhol, to his boss’s horror. Their exceptional acting constantly draws us into the wavering conflict, adding personal and intellectual complexity.

“The four pieces will be companions to each other,” Rothko says. He wants them to comment collectively on the wealthy, and belittle the bourgeois consumers of his art.

Ken and Rothko attack a white canvas together, covering it in deep red. In their tightly choreographed dance to Gluck’s quick-paced opera, “Iphigénie en Tauride” (exciting Sound Design by Adam Cork), the two painters weave back and forth in oneness. Director Michael Grandage’s duet in red, creates an astounding visual moment. Their dance for two embodies the old and young men’s complex connections—for once in balance.

After visiting the Four Seasons, Rothko becomes disillusioned. The elite patrons will focus on food and gossip, ignoring his life’s work.  Rothko wants them to dislike his work, to be insulted by depth of color and meaning of lines. But Ken denies Rothko’s “malicious intent … Your paintings are not weapons, you would never reduce them like that!”

We wonder if Rothko will return the money and keep his children? Or, will he allow his works to languish with those he claims to abhor?

Thanks to Logan’s emotional counterpoint, I am inspired to lose myself in a painting, and ask myself the opening and closing question of “Red”: “What do you see?”