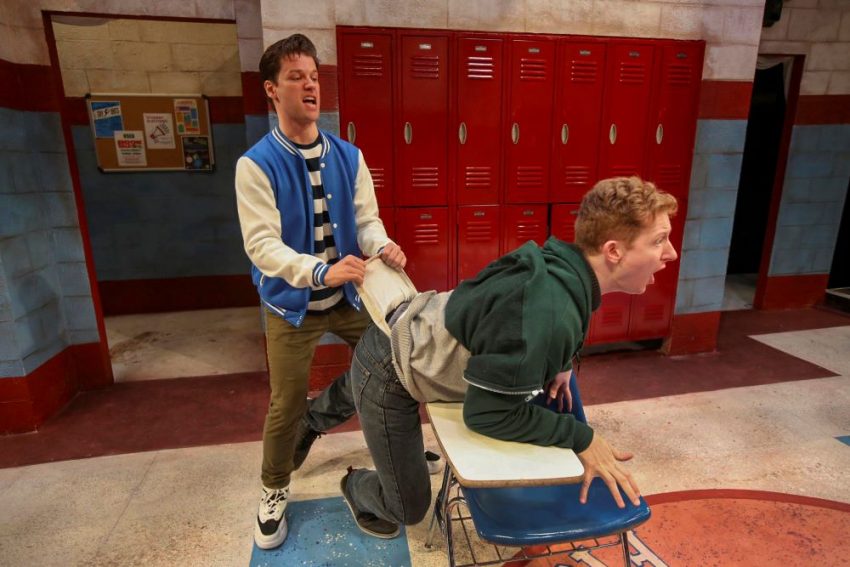 Michael Lew Turns “Winter of Our Discontent” to Comedy

It all starts in high school, where it’s so easy to shove aside the weak and the geek. At Theatre Wit in Chicago, playwright Michael Lew combines outrageous teen comedy with a Shakespeare villain. Lew makes us question whether the cruel majority have made his Richard into a monster by isolating him.

If you ever felt trapped by concrete block school walls, you will recognize poor Richard Gloucester (versatile MacGregor Arney), the teenage reincarnation of Richard III, who talks to us jokingly about his disability and his rejection.

Director Brian Balcom and Designer Sotirios Livaditis perfectly reproduce a high school gym floor with the red and grey insignia of Roseland High. The jock screams: “Go Stallions!” And a row of cherry-red lockers draws us into a spirited conflict between jocks and geeks.

Arney’s high school Richard has cerebral palsy, as does the actor. His Richard is an outsider, trapped in the world of the able, athletic, and popular. We see the world anew from his disabled point of view.

Richard maneuvers to displace Eddie and run for Senior Class President, himself, reminding us of comic teen movies—like Reese Witherspoon in Election. Richard earns the title of Teenage Dick—or maybe Teenage Don— asserting, “They all hate me, repulsed . . . but Eddie is like a Faberge egg, so pretty.”

Richard works his wiles on sensitive Anne (graceful Courtney Rikki Green) who succumbs to his appeals.  When Anne offers him a dance lesson in the gym, he evokes our empathy, too.

In a flash, Anne rolls out a dance bar, the lockers flip into mirrors, and she is teaching him some moves. But he uses the moment to ensnare Anne, his innocent prey. His tricks work so well that, like Anne, we still hope for change.

It’s a high school satire where Richard and Anne enjoy a moment of hope. But they cannot escape the spiral of toxic narcissism. Richard tricks them all, including the over-zealous fundamentalist Clarissa (hilarious Kathleen Niemann). Clarissa snaps, “You are a side show, you shit show. Disability is your college ticket—I need the freak vote!” She speaks the lingo of teenage hate.

Tamara Rozosfksy is convincing as Richard’s buddy, wheelchair-bound Buck. She speaks as “the grounding force of morality,” but Richard retorts, “Stop trying to be the voice of conscience.” Buck never stoops to Richard’s depths of vengeance, in her cool, engaging performance.

In a rip-roaring eighty minutes, Director Balcom plays on our hopes and dashes our dreams—in an SNL-worthy comedy of survival and depression.

Arney’s Richard connects deep injury to pointless competition. Do our fears drive us to ridicule the Other? Is high school the breeding ground for nasty selfishness? Pandemic much, lately?

“Teenage Dick” by Mike Lew, directed by Brian Balcom, at Theatre Wit, Chicago, now streaming, until May 17, 2020, at: theatrewit.org