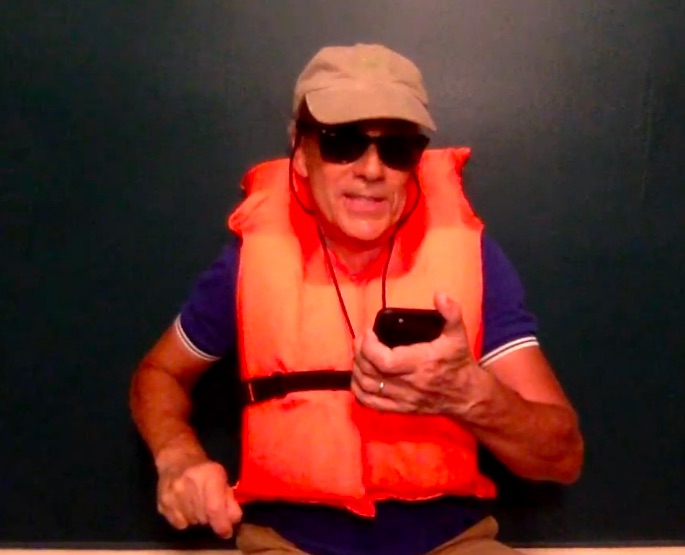 John Fisher, Master of Suspense, Sails Us to Risky Waters

Magically, the small computer screen enhances the fevered excitement of John Fisher’s one-man show called “Shark!”  I was provoked to ask myself: “What would I do, if . . . . . ?”

Just the word “shark” scares the hell out of me. Reminders of Jaws 1, Jaws 2, and 2016’s The Shallows root me to the earth. But Fisher’s “Shark!” portrays the depths we will go to achieve a goal, even into shark-infested waters.

Fisher writes, directs, and acts in this fast-paced fictionalized memoir based on his desire to navigate a Laser 15’ sailboat. With a blue/gray background and towel-covered wooden bench, Fisher leaps in and out of sight to mimic the boat swaying in the waves. When his imaginary boat capsizes,  he demonstrates amazing  dexterity. He hops onto the keel, mimicking the complicated moves needed to get the mast upright before his boat sinks.

In his early teen-age years, from the moment his Dad brings home the Laser, John yearns for adventure. Fisher weaves in echoes of his lonely childhood, swimming 40 laps, then a mile, testing his swimming abilities, alone. He plays the boy conquering distance—to see how far can he travel . . .

Like the master solo artist he is, Fisher unfolds his adventure in three hair-raising trips. On his first sail as a teenager with his Uncle Craig, a Columbia University Classics Prof, they wind up in the water. Fisher confesses, “I almost drowned my Uncle Craig.” Using naive humor, he evokes the power of the gods, blaming his poor decisions on “hubris.” Young John imagines himself the equal of Neptune, God of Sea.

Fisher shares a life-long desire. He is compelled to sail to the Farallon Islands twenty-six miles north of San Francisco, in the open Pacific Ocean. The Farallon waters are also the underwater grave of the USS Independence. He takes us on his nail-biting, tumultuous practice run from Berkeley to the Bay Bridge, and he keeps us strapped-in, spellbound.

Since I know that choppy four-hour boat ride, his solo trip in a small sailboat makes me truly uneasy. Why this death-defying goal, reminiscent of Evil Knievel’s motorcycle jumps? Has Fisher decided to test the gods, again? How far would we go to accomplish an overwhelming dream?

Fisher sails us toward the islands, and over the battleship buried in the depths. As he turns toward home, he continues to test his resolve and resilience as his boat battles the ocean’s pounding. Neptune’s winds blow, hours pass, and the sharks thrash in a feeding frenzy as he nears the deadly rocks.

He has us, we are with him, as frightened and exhilarated as a sailor alone in a small boat on the vast ocean in ten-foot swells.

John Fisher, a remarkable storyteller, captivates us with his intensity and charm. Fisher’s “Shark!” ends with a shocking twist, as he plumbs the depths to explore his character’s daring.  Join him on a thrilling, dangerous ride! 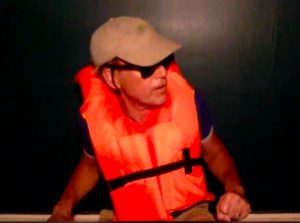