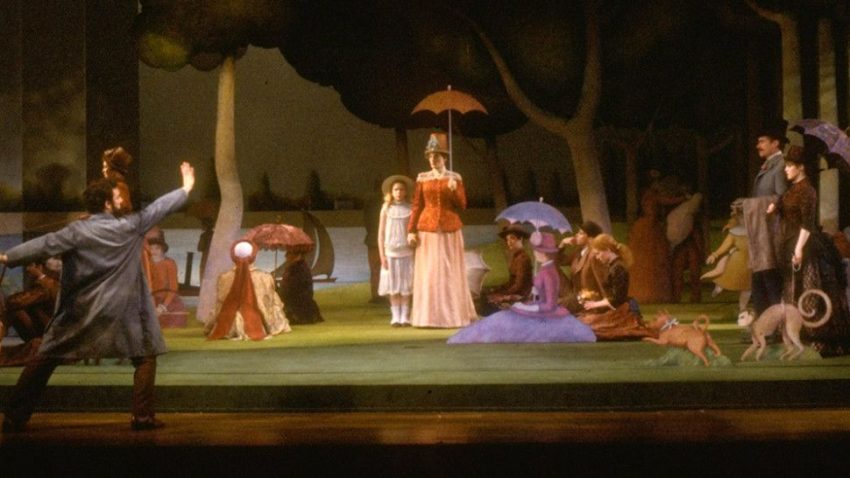 Stephen Sondheim’s Pulitzer Prize winning musical “Sunday in the Park with George” offers insights into Georges Seurat’s famous room-size painting of Parisians in the park. At the end, Seurat’s fictional great-grandson, a modern artist, explains, “White. A blank page—or canvas. So many possibilities.” The original production, available on PBS, shows us the possibilities of life vs. art.

In two acts, the brilliant 1984 musical depicts two artists: one, theFrench Impressionist Seurat, and second, the U.S. Modernist George. In 19th Century Paris, Seurat ignores his friends who advise him to paint in a more conventional style to sell his paintings. In the 20th century, his fictional great-grandson also struggles for attention from the art world.

In this video of the original show, Sondheim’s genius overflows with lyrics and music covering their intertwined stories. The witty songs are delivered flawlessly by the superb Bernadette Peters, as Dot, Georges Seurat’s girlfriend and model. Her expressiveness offers amorous counterpoint to Mandy Patinkin’s clever but depressed Georges.

Act One opens with Seurat, the scientific artist, and then his Dot, a beautiful point of light in Seurat’s immense painting of workers, maids, and slumming upper-crust. She adjusts her fashionable bustle while posing. One by one, the trees float down and the park appears magically. The figures in Seurat’s masterpiece enter one by one, in a thrilling opening scene, summoned by the painter, himself.

Patinkin’s seriousness balances Peters’ emotion with their stage chemistry. The first half of the musical is devoted to Seurat’s singing obsessively about his painting—much to the distaste of Dot, who wants affection, not idolization. In Act Two, Patinking embodies George, the great-grandson, also an artist, also at war with conventional taste.

Despite his inner turmoil, Seurat tries to distill order from everyday chaos. He approaches painting like a scientist, to “bring order to the whole through design—and position, balance, light, and harmony.”  Seurat’s tiny dots of unmixed pigment let us mix the colors in our minds’ eye–a unique achievement.

With Sondheim’s upbeat music, the painting’s ghostly figures take on harsh, earthy lives. They come from all social classes in Paris, and their songs soar from coarse to conceited to profound.  The burly French worker spars with the artist, while two young women whisper jealously about Dot. The classes of 19th Century Paris parade before us–in eccentric modern music and lyrics defining art in an unequal world.

Scenic Designer Tony Straiges makes wonderful use of silhouettes alongside live figures. If Seurat doesn’t like a tree, he moves it. Music and setting are similarly playful, experimental, and witty.

In her opening song, Dot humorously complains, “Why is it you always get to sit in the shade while I have to stand in the sun?” Her song is heartbreaking because Seurat’s obsessions cut her out. Although Georges sees the details of her bustle-dress, he cannot see her.

Like his ancestor, modern U.S. artist George complains about the need to please patrons, museums, and dealers. Modern American George denounces the collaboration between art and money-making in his cynical song “Putting It Together.” Young George reveals the need to cater to wealthy investors, who do not understand his art. In Act Two, Marie sings about “Children and Art,” tying the two together.

Sondheim writes such beautiful and poignant songs, I found myself moved deeply. “Sunday” has been revived many times, and the musical is still fresh and exciting—well worth a visit to enjoy Peters, Patinkin, and the original show on line. A treat!