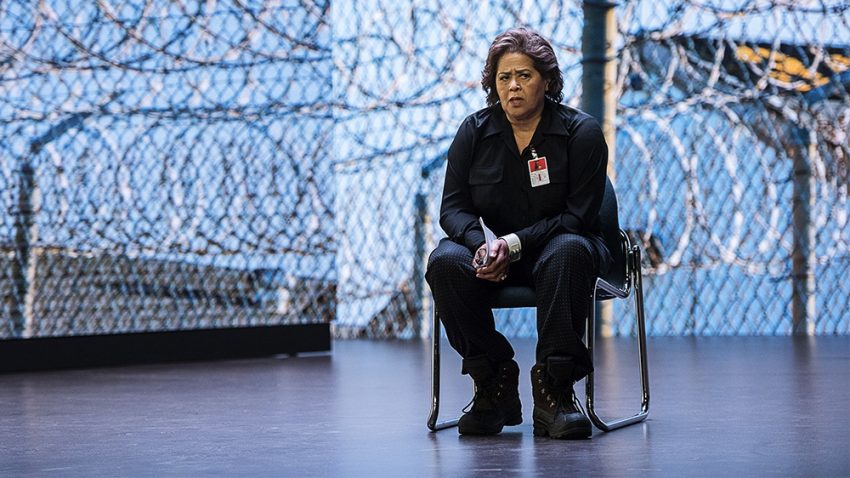 The sweet sound of gospel voices resonates on our screens as Pastor Jamal Harrison Bryant, brilliantly re-created by Anna Deavere Smith, takes the podium. He asks his fellow worshippers to “give God a hand clap of praise” for those who have died at the hands of police: Eric Garner, Amadou Diallo, Kimani Gray, Shantel Davis, Ramarley Graham, Alberta Spruill, and Freddie Gray.

In her transformative ninety-minute, solo show, Smith seamlessly morphs into eighteen people chosen from over 250 personal interviews. Backed by Marcus Shelby on bass, Smith creates a symphony from stories of our deeply flawed schools—that railroad students straight to prisons. 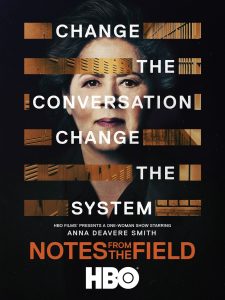 Anna Deavere Smith, standing erect yet casual, embodies Mayor Michael Tubbs of Stockton. He asserts that many of his young people “just wanna be alive at 25.” No dreams of college or a career. Their fate is an unavoidable gamble between “prison or death.”

Smith’s spot-on portrayal of Tubbs, based on interviews, highlights her meticulous gift for signature movement. She gives us a taste of the gritty reality that many POC face from kindergarten to high school—our first glimpse into the devastating “school-to-prison pipeline.”

Next, cross-legged and purse-lipped, Smith channels bright-eyed teenager Niya Kenny, who gets arrested for simply defending her classmate. Niya asks, “Is no one going to help?”

Caught in the pipeline, Steven Campos, who served time at Close Youth Correctional, now works as a dishwasher in Los Angeles. Steven believes: “If you wanna change, you gotta do it yourself.” Smith sits dead-eyed, rigid and unwavering, bringing Steven to life.

At the end of the journey, we find current inmate and dog trainer Denise Dodson. After classes at Maryland Correctional, she now trains support dogs for disabled people. She asserts: “Out of 100 dogs, 89 are gonna make it.”  Smith speaks with maturity and poise, summoning Denise’s dignity onstage.

At each step in the journey, A.D.S. shows how the “pipeline” grows from our neglect of both schools and the kids.  She points out the tragic results: the loss of opportunities for generations of students, a damaged view of life, of themselves, and often, an early death.

But Smith shows other paths, too: Bree Newsome scales a flagpole in Charleston to remove a Confederate flag. Stephanie Williams calms a sobbing foster-care child in Philadelphia. Smith effortlessly switches between their personas.

Stoically seated in a chair, her face contorted with a Southern drawl, Smith becomes Congressman John Lewis of Georgia. In Montgomery, Alabama, the police chief yields his badge to Lewis for his failure to defend Lewis. It’s the first apology Lewis has received from the southern police who beat him.

In this moment, the church is completely silent and full of tears. Lewis hugs the officer, saying, “I forgive you. I accept your apology.”

My screen erupts in a glorious “Amazing Grace” that harnesses Lewis’ power of forgiveness and redemption.  Humanity and forgiveness shine through. Smith has blazed a trail to a greater good.

Smith ends with MLK’s words: “If we are out to redeem the soul of America, we first have to redeem ourselves. Embodying 18 people, Smith leaves us with chills, and a new-found sense of hope. Don’t miss Smith’s amazing grace in 18 voices.

“Notes from the Field” by Anna Deavere Smith, directed by Kristi Zea—Streaming at Amazon/HBO