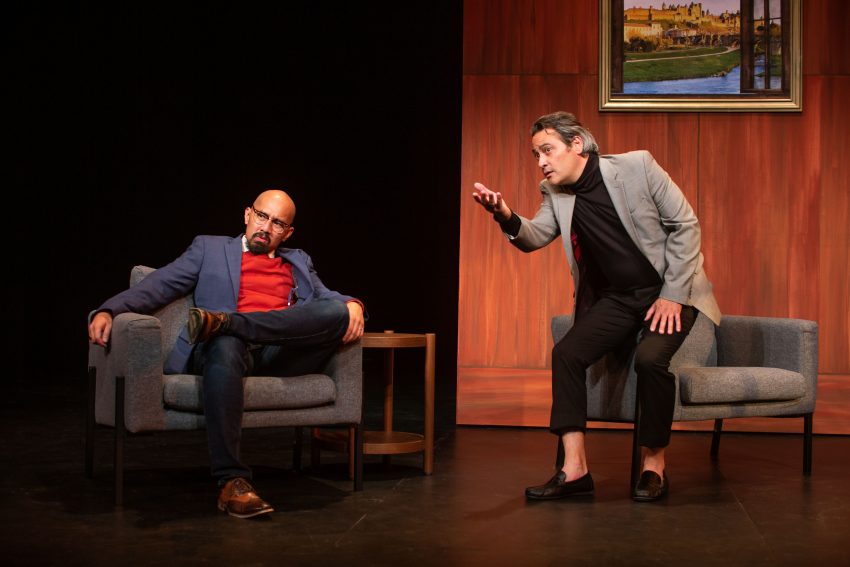 Yasmina Reza’s “Art” (1994), translated by Christopher Hampton, took the theater world by storm—it’s a brazen attack on the value of abstract and overvalued paintings. As a French woman playwright, Reza has taken on the art world and male pretensions, as well.

Reza scrutinizes the relationship of three professional Parisian men, and their destructive dispute over a piece of art. The painting, a large, stark white canvas, with arguably some hint of grey lines, cost Serge (elegant Johnny Moreno) a stunning $200,000.

Reza builds her story around these three shallow and belittling friends without giving us much background. They have little to discuss, aside from their differences on money and art.

Serge, a wealthy, Paris dermatologist, wants his friend Marc (exciting Jomar Tagatec) to admire his purchase. A lot of Serge’s pride is wrapped up in the painting and its price. But—alas, Marc is not so eager to affirm Serge’s social and aesthetic superiority. Serge insults his taste, loyalty, and even friendship.

Marc, an aeronautical engineer, explodes when Serge attacks his sensibility. But, the rebel, Marc tries hard to open Serge’s eyes to the nonsense of the art world. But Serge wants to be the Alpha dog, like a minor deity. He has ascended out of Marc’s class, now—so, he assumes wealth means power.

They have split off into upper and middle class—and can never agree, again. It gets nasty— reminding us perhaps of coastal elites vs. mid-western workers.

The superb acting draws us intimately into Yasmina Reza’s precisely written and engaging script. As the two old friends fall into bitter disagreements over the blank white canvas, Reza triggers our basic allegiance to either success or to simplicity. On these rocks, many friendships have foundered.

Their humble friend Ivan (versatile Bobak Bakhtiari) tries to smooth things over. Seldom taking a side, Ivan is eager to please his friends. Separately, he agrees with both. He moves Serge to laugh about the money. Talking to Marc about Serge, he exclaims, “He’s Happy.”

The three speak for three social classes, but they cannot admit it. They wrangle over art and their values. They are angry and funny in their self-imposed delusions.

Ivan turns out to be weak and rudderless—even about his upcoming marriage. As the Common Man, Ivan cannot decide between Serge the Top Dog and Marc the Rebel—they will battle on, spurred by ego and vanity.

Bill English’s impeccable direction and design on a Covid restricted stage, keeps us riveted to the trio’s wordy, emotional self-justifications. The chairs remain six-feet apart while the triangular wall turns, switching the feel of each rapid scene.

Their fiery arguments expose each man’s insecurities and failures—with a comic edge. The painting now represents their friendship, and Serge’s dominance.

Reza leaves us to ponder privilege and power among friends. How did their “friendship” get to hanging on the precipice of destruction?

She also exposes the impossibility of the rich and middle class sharing deep values in our capitalist world, whether it be Reza’s Paris or our U.S. 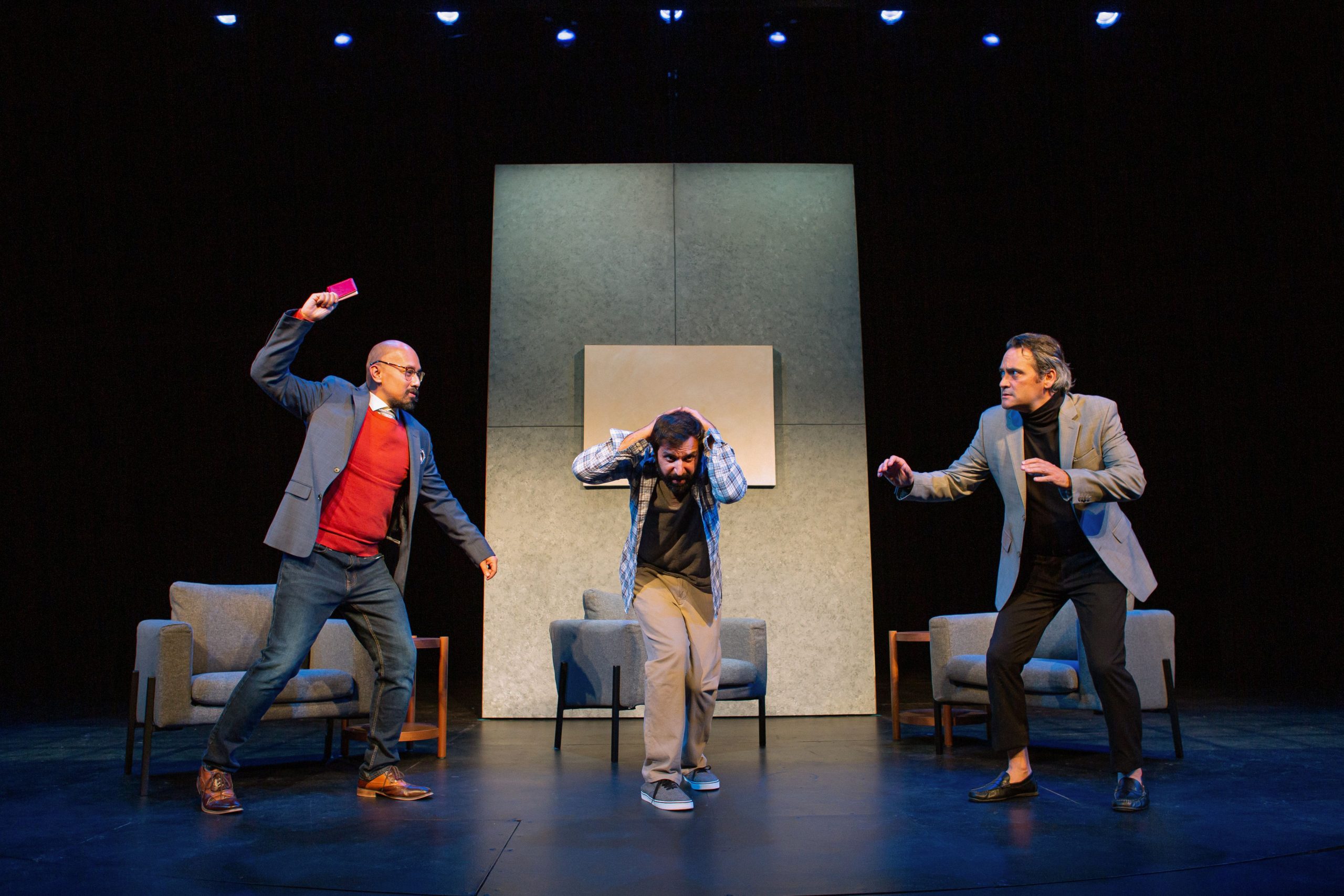