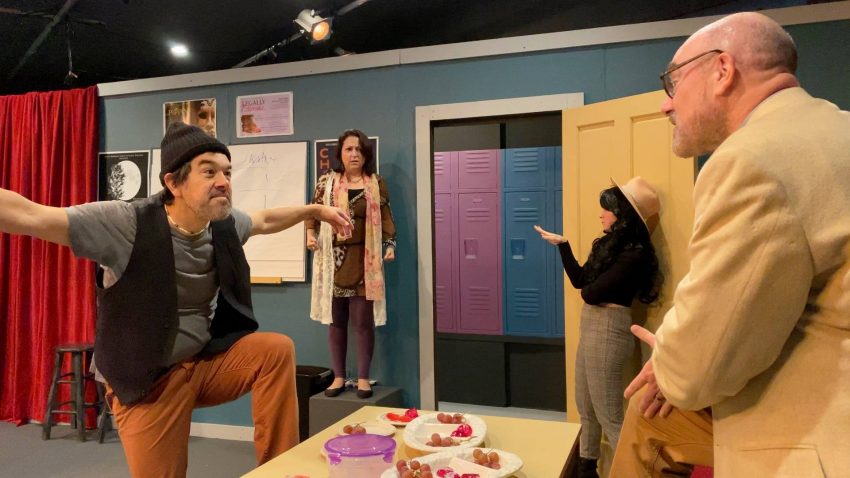 “The Thanksgiving Play” is a mind-stretching, satirical “Let’s learn that” tour through the false history of the indigenous people in America. Larissa Fasthorse portrays white Americans as phonies, unable to find a true self, or understand Native American culture.

Director Jeanie K. Smith promotes a quick pace, artistically weaving in puppets with profound messages about liberty. The Zoom classroom setting and video, artfully designed by Argo Thompson, have the feel of a real school. And the comic actors brainstorm and debate with passionate, but ill-conceived ideas about writing a new Thanksgiving script.

Logan hires actor Alicia (clever Grace Kent), who hails from L.A. with European ancestry, but posed as a Native American in her head shot. Simple-minded Alicia thinks Native Americans invented turquoise. Alicia honors her simple self; she enjoys being pretty, and stares calmly at the ceiling, expressing her “contentment”—a rare achievement.

We laugh at Logan’s anguish at discovering that Alicia is not Native American, as her teacherly anxieties overwhelm her.  Logan intends to produce a “devised” play, meaning the four actors will brainstorm ideas, work out the theme, and write the script together. Of course, mayhem ensues.

They want to solve the puzzle of political correctness, but they don’t know how.

The fourth member of this rag-tag cast, third-grade history teacher Caden (subtle Mike Schaeffer) mansplains about the murderous Pilgrims. Logan, Jaxton, and Alicia show little interest in his facts, because they have their own agendas. Caden emerges as an uptight, wannabe playwright, showing off for the lovely Alicia, his comic love interest.

Fasthorse also has fun with frozen turkeys and hopeless theatrics. Logan hopes to save thousands of turkeys, but Alicia has them all playing “Frozen Turkey Bowling.” Their serious intent is continually upset by silly games and misleading ideas about traditions.

At one point, Caden describes the 1970 Thanksgiving Native American protest at Mount Rushmore. Protestors were arrested, beaten, and jailed without medical attention, much as they are today, with their basic rights to protest denied. How can he fit that into the play, too?

The three other aspiring characters meet Caden’s truths with ignorance and lack of understanding. As they prance around the classroom, Director Smith shows that they are the real and comical turkeys, themselves.

Somehow, in the midst of chaos and distractions, “The Thanksgiving Play” exposes those who reject the truth, and ennobles those who are willing to seek new knowledge. Sometimes, it’s enough to stare at the ceiling. And then we can laugh—as the school tries to embrace newly discovered facts, and reject the old lies.