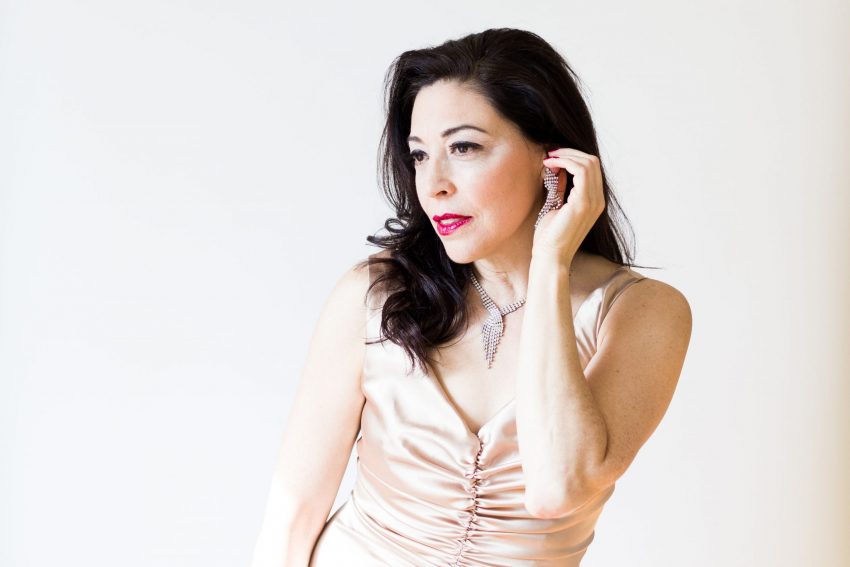 The premise of “Overlooked Latinas” is brilliant. Tina D’Elia spotlights the political power of famous 1930s to 50s Latina movie stars in her gripping solo show about Angel, an aspiring lesbian TV writer.

As the playwright, D’Elia depicts how these Latinx stars activated a cultural revolution.

Thanks to D’Elia’s many-faceted talent, Ramón Novarro, Dolores Del Rio, and Lupe Vélez all appear. They are also facing Senator McCarthy’s savage 50s witch hunt for “communists” and gays in Hollywood, setting up a public struggle.

D’Elia plays all nine characters, and like a carousel, they come and go rapidly. You have stay alert to keep up with her pace. Although the Zoom format does not favor her quick movements and fast speech, her distinctive facial expressions surpass words.

While the soap opera script serves as façade, our Angel has a life. She is married to Lena Anne Horne, once a prominent Jazz singer, who wants to have a baby.  Lovely Lena carries a turkey baster in case she meets the right man.

In the 70-minute show, D’Elia transforms herself into a rainbow spectrum of clever characters. Some stories fade, while others shout out to defend persecuted immigrants who demand attention and respect.

When the “Hollywood Ten” get blacklisted, Angel turns to another movie star, Rosaura Revueltas, for a role model. Revueltas, “fierce as an activist,” gets arrested and jailed while filming, ironically, “Salt of the Earth.” She suffers the wrath of the Red Scare—deported as a “communist”—never to work in the U.S. again.

When we hear Anita Ellis singing “Put the Blame on Mame,” we see that all these powerful Latinas have been unfairly blamed for Hollywood’s missteps. Pandemic anti-Communism took a terrible toll, as many Latinx people faced expulsion.

Be sure to watch for quick quips and surprising stories inside their cliché- and fun-filled TV series.

Tina D’Elia, a powerful and touching solo performer, makes me want to see and know more about these hidden heroes.

Cast: Tina D’Elia (all the roles)