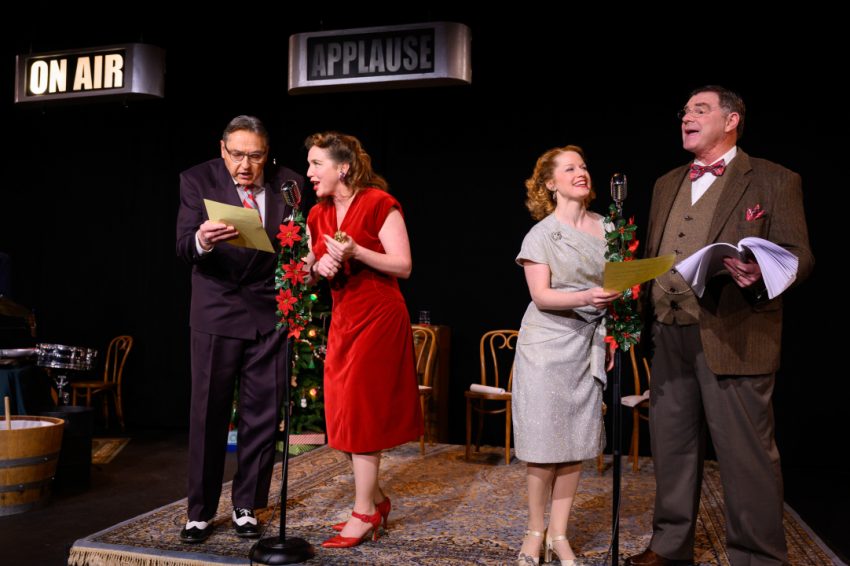 We are in radio STUDIO A at WBFR in Manhattan on Christmas Eve, 1946, watching a radio version of It’s a Wonderful Life. Contra Costa Civic Theatre has revived last year’s exceptional show with the addition of Fred Pitts as earnest George Bailey, the classic Jimmy Stewart role in the holiday movie.

Behind the scenes at the live radio broadcast, six actors play more than 50 roles, in the Joe Landry adaptation. Commercials interrupt with advertisements for men’s hair cream and auto windshield bug cleaner—complete with catchy jingles. It’s a nostalgic kick!

When the APPLAUSE sign appears, the actors, scripts in hand, lean into the big microphones, telling the story of George Bailey in Bedford Falls, New York. In chic 40s dresses, tweeds, and double-breasted suits, the actors shine as period radio stars, playing multiple roles. Each actor plays a recognizable radio personality–as well as the characters in the story–quite a feat!

So, why is this George Bailey so distressed?  We’ve all seen the movie, so we know George has given up his dreams of travel and education for duty to the family business, Bailey Brothers Building and Loan. Although George has championed fairness and generosity, he has yet to learn that “no man is a failure who has friends.”

“It’s a Wonderful Life” reminds us that people are out of work, today, unable to pay their rent or their employees. George blames himself, but the play urges us to look beyond ourselves for deeper causes.

Meanwhile, in Heaven, Clarence, an Angel Second Class (sincere Keith Jefferds), is pleading for his wings.  As George’s guardian angel, Clarence descends to Earth to convince George not to kill himself over his failing business. Clarence tries to help George realize how many lives he really has touched, already.

Now, radio requires we use our imagination.  An array of everyday objects—shoes, a telephone, spoons, and a tire—sit in front of sound effects man Bobby Bell (ingenious Don Tieck). He’s full of witty radio sounds from unexpected objects.

Bobby Bell flashes us back to 1919, as an icy lake cracks and 12-year-old George saves his younger brother from drowning. Whatever Bobby is pouring into that bucket, it sure sounds like ice cracking.  The sound effects echo George’s lonely search for meaning in his life.

To make his point, aspiring Angel Clarence shows George how he also prevented disaster while working at the local drug store.  Remember, George is 12 now, so Pitt’s voice rises to a boy’s pitch, convincingly.  Clearly, each actor has a terrific time switching characters, constantly.

When George is reunited with wife Mary (demure Merrill Grant) and daughter (sassy Kim Donovan), the little girl tells us that “every time a bell rings, an angel has just earned his wings.”

Along with George Bailey, we may be sick or discouraged, right now.   But, even without live performance, the show must go on. CCCT has come up with a fittingly old-fashioned way to satisfy our longings during this challenging holiday time. Landry, Bogdonoff, radio actors, and familiar characters remind us of our good fortune, past and present.