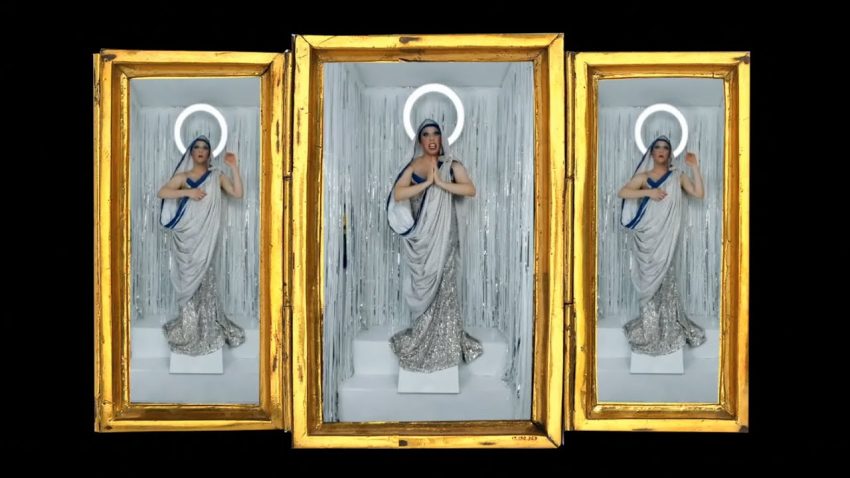 I have been riveted by Joshua William Gelb’s brilliance and adaptability since Theater in Quarantine started in March 2020. Streaming live theater performances from a closet in the East Village … cool.

And creating intellectually stimulating and visually avant-garde theater via video that we enjoy in quarantine. while safely existing in our homes … well beyond cool . . . borderline genius.

As we ring in 2021, we can all agree that 2020 was an epic shitshow, offering us nothing but painful lessons. The lessons that resonate most with me center around social justice. As good as we think we are, we must realize that we all live on a continuum of imperfection and our best selves can only be realized somewhere along the line of improvement.

I’m not sure if Heather Christian connected the dots like I did, but through an intellectual, visual, musical, lyrical, and theatrical tour de force, Theater in Quarantine delivers on all fronts to prove that self-reflection and improvement has no beginning and no end; and should be considered as a worthy state of existence…full stop.

“I Am Sending You the Sacred Face” is the inspired creation of Heather Christian, an Obie Award winning composer/performer. She combines rich intellectual content with hip, original music, and lyrics to produce a brilliant contemplation of one of the world’s most famous figures—Mother Teresa.

Despite tarnish to her reputation in recent years due to her anti-abortion/anti-birth control stance, as well as her wealthy Albanian upbringing, MT dedicated her life to caring for the destitute and dying in the slums of Calcutta, receiving the Nobel Peace Prize and canonized after her death…a rather nice achievement if you’re Catholic.

Christian’s 2020 Mother Teresa refuses to bask in the glory of her sainthood. Rather she wallows in self-doubt and introspection, saying, “Saints do not practice self-care, we practice self-annihilation.” As MT sings with Christian’s voice, Joshua Gelb contorts in the closet, his body in a white, blue-edged gown with a garish neon halo.

Some critics suggest that the video production antics of Theater in Quarantine detract from true theater, but I strongly say no. “COVID live theater” offers a new artform. Necessity is still the Mother of Invention. The video design and production in “Sacred Face” stuns us with all the gilded beauty and iconography of traditional Catholic art.

At first, I thought the intended focus on drag was overplayed. Appearing in both the title and the script, drag focus on contradictions—a man playing a woman, a saint and an imperfect human, Mother Teresa’s outward persona vs. her inward self-reflection. With a second viewing, Gelb’s Mother Teresa spells it out: “Be the change you wish to see is a kind of drag.”

Like this self-doubting saint in a closet, we are all just trying to get better, right?