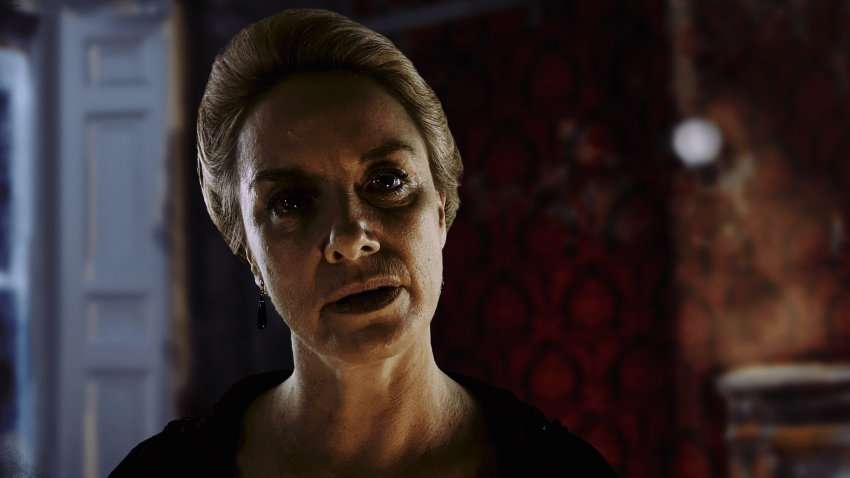 In a dark cemetery, in the plague year 2020, we join two frightened YouTubing millennials: venturous Matt (Max Bowden) and his girlfriend, skittish Caitlin (Alexandra Guelff). They are videotaping rows of crosses from the Spanish Flu in 1918, to compare to Covid19.

Their hand-held smart phone focuses on a flat tombstone, with the name Francis Bowles, 1918, covered by bold, black letters that read “Monster,” drawing us immediately into the story.

Suddenly, we time warp to Norfolk, England in 1918, where the Spanish Flu has supposedly claimed another victim: Francis Bowles, abusive husband of Alice Bowles (impeccable Tamzin Outhwaite). Their anxious, weepy stepson, Joseph is well played by Jack Archer. Although the plot is thin, “The Haunting of Alice Bowles” features superb acting which keeps it alive.

Alice is left with nothing in her ex-husband’s will. Mother and son read a letter that reveals how she can resurrect Francis, with the warning that his spirit may never leave. 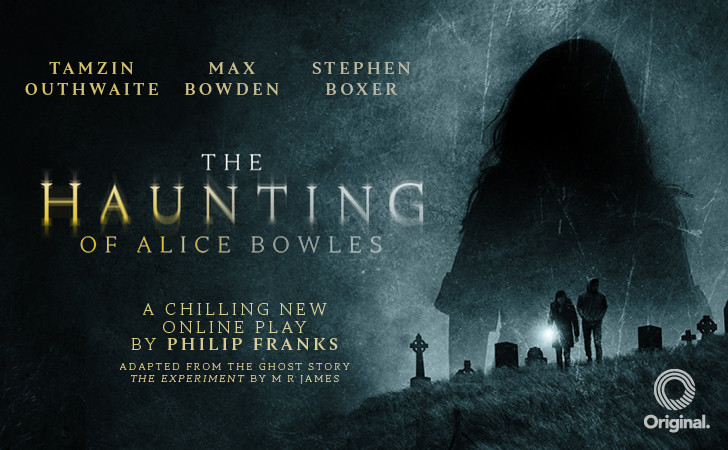 Matt and Caitlin google the life and death of the monster: the sadistic devil-worshipping, pedophile Francis Bowles. They share their adventures on YouTube, hoping to turn clicks into cash.

The horrors of the two pandemics, and the need for money, gives way to selfishness. Alice and Joseph, as well as Matt and Caitlin, dismiss the power of the “Monster.” Meanwhile, another monster inhabits them, greed—leading them to gamble on finding a dubious treasure.

I wonder why Franks conjures a superpowered, evil essence bent on revenge. His underlying Message emerges: “Greed kills and ruins lives.” A flashing Trump photo reminds us of the monster who manipulates us through lies and promises.

Although not in the same caliber as the tales of Alfred Hitchcock, and I never feel a breath on my neck or rarely spooked, the play unfolds as a well-paced supernatural mystery. The darker, ghostly 1918 sets the eerie tone that transports us back and forth between generations. Outhwaite and Bowden deliver exceptionally haunting performances. The bone-chilling acting of Tim Treloar as the Boatman stands out, along with the suspicious Dr. Hall, keeper of the graveyard (versatile Stephen Boxer).

Co-directed by Franks and Whatley, with video and editing by Tristan Shepherd, the play flows smoothly, filmed under socially mandated conditions in actors’ homes. The split image suffers when three people interact in the same room; but outdoors, the black cloud of horror and creepiness descends.

I liked the play. It’s creative and thought provoking.  I found that the “The Haunting of Alice Bowles” is a lesson in not allowing our desires to overtake our judgement.