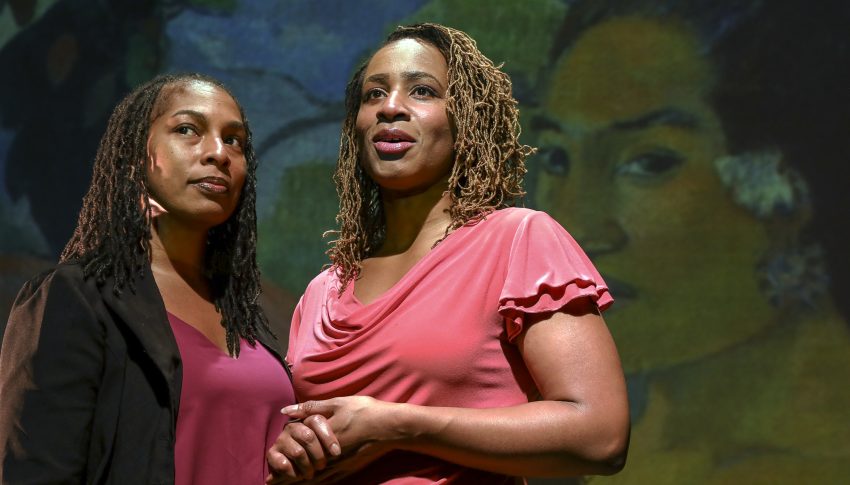 Nicole Parizeau Paints a Portrait of Business vs. Art

“The Human Ounce,” an audio play, begins by asking: How can we value a masterpiece—in any art form—when we learn the artist is a Nazi, pedophile, racist, or immoral?

Within minutes of the opening, Jory demands that a revered masterpiece must come down. The painting, by a famed 19th Century artist named Gilding, hangs prominently in the museum—and now Jory calls it “corrosive.”

A distinguished art magazine has just released damning details that “unambiguously reveal that Gelding was a serial pedophile.” Jory demands immediate action. The museum must not accept the “depravity of the man who made it.” She takes a moral stand: They must not tolerate immoral and racist acts, despite Gilding’s brilliant achievements.

I am surprised by the intensity of her demand, as is her colleague, the calmer Biz. Central Works’ director Gary Graves keeps the pitch high and the pace fast. Although the audio is easily understood, I miss seeing the their expressions and movements.

Through Biz, Ridgeway champions reason above emotion. Biz defends art: “It’s a work of art, Jory, an inanimate object. It has no clue about its origin.” But her first thoughts turn to keeping the museum alive—and answering to funders.

We row arduously down the forty-five-minute stream of historical figures from Bill Cosby to Harvey Weinstein, from racist Agatha Christie to anti-Semitic Thomas Aquinas. Jory repeats her mantra: “And the thing to do is act.” It’s like riding a carousel of circular reasoning.

Don Wood plays Dodge, the custodian, who brings fresh air to the academic debate. Wood’s comedic finesse and rational tone bring the heady debate down to earth. Dodge says, “I mean, when I listen to music, I’m not condoning the artist’s behavior. I’m just … listening to music.” Dodge stands for us, representing plain common sense.

The two Black women are competing in a white, male dominated art world. Super-ethical Jory shines argues for abused victims “who were never shielded from the powerbrokers of society.” Her point of view brings us right back to #MeToo and #BLM, now swirling around us.

The powerbrokers of Wall Street flashed before me. No matter who wins Biz vs. Jory’s argument—whether the painting stays or goes—the ultimate decision depends on faceless boards. Or, on people who can manipulate and embarrass them.

“The Human Ounce” draws us closer to our own social, moral, and personal values. Parizeau lays out several resolutions from which to choose. Well worth the listen.