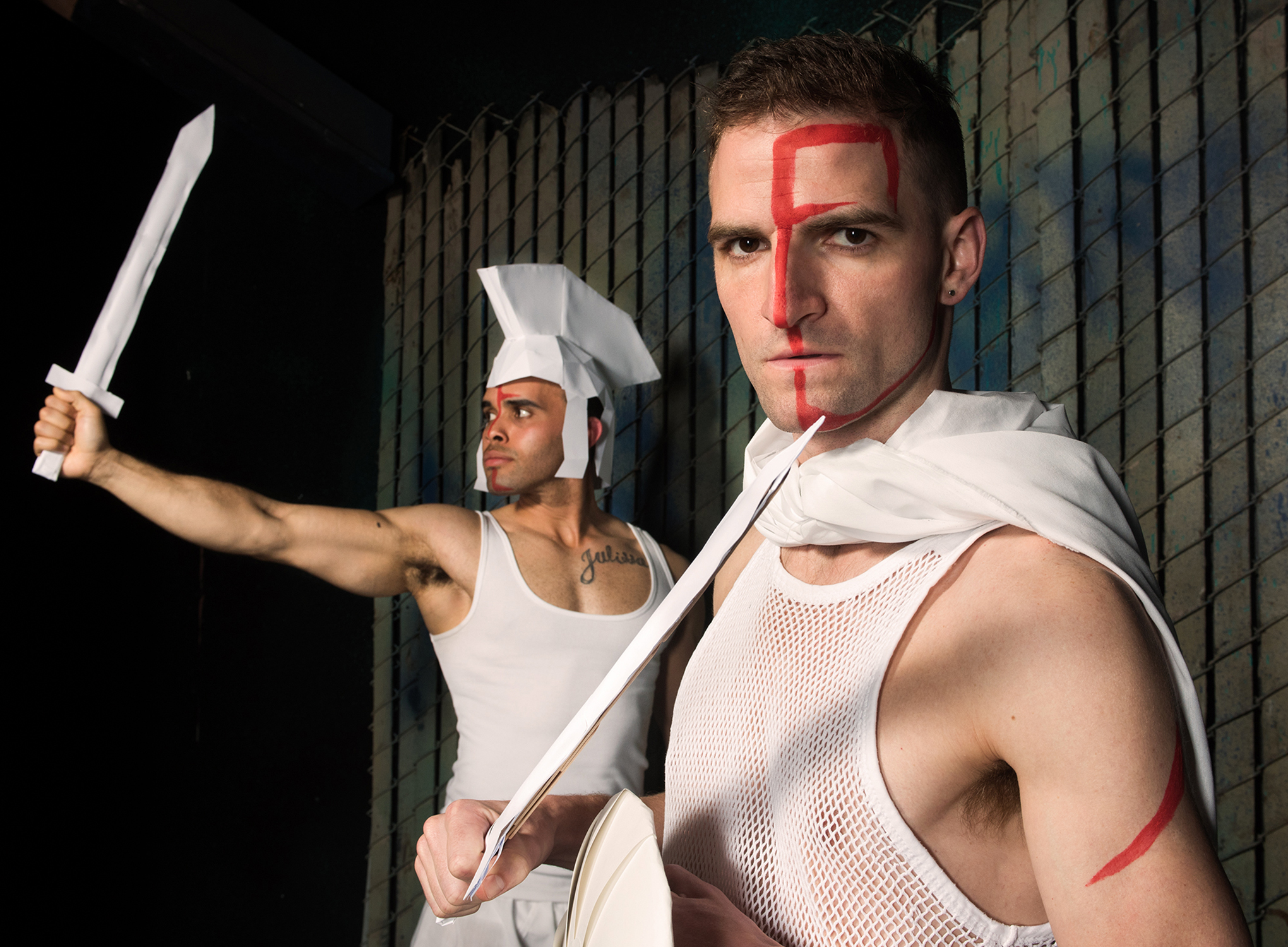 Meet two young Greek warriors: One named A for Achilles and the other P for Patroclus. Looming behind them we hear Homer’s Iliad, with the Trojan War raging in their future. They speak like we do, and they struggle to understand each other. New Conservatory Theatre Center brings back JC Lee’s “warplay’ from 2017, in a taped dress rehearsal.

A (powerful Ed Gonzalez Moreno) is driven by ambition, but powerless to change his nature. He remembers when his Mom dipped him into the River Styx and made him almost immortal—oh, that “almost!” The future of civilization balances on his heel and on his arms. Will A join the war and win Troy for his team? Or, will he remain behind with P, his buddy?

P (sensitive JD Scalzo) thinks about their future and he does it with heat. Scalzo pushes all of his buddy’s buttons. He adores brave A, who is macho, mighty, and military. But P has other ideas. He wants to slow down their trek, camp out, get to know each other. P is the poet, the thinker, the questioner. Watch Scalzo, as his body and features ebb and flow like the sea.

Scalzo burns up the stage, summons the depths of friendship, making us believe in their love. P knows his friend is on a self-destructive mission, and usurps A’s place at the warfront. P tries to be a fighter and a wrestler, hunting bunnies to prove he’s macho. They are the original Odd Couple, starting as kids.

The setting and staging by Director Ben Randle present spectacles. Fathers and generals cast grand shadows, a massive shield looms, and battles rumble from afar.  Well worth the voyage, “warplay” is inspired Homer for our time, based on childhood dreams.

JC Lee’s play multiplies the mystery of their great Greek love affair—as A and P query their connection. Their love is subtle, serious, and touching. Lee’s raises questions about life in time of war, about love at any time.

When A handcuffs P to a great wooden ladder to keep him from the war, we recognize the great sacrifices they make for each other. Lee’s “warplay” boldly follows them, even to the afterlife.

Finally, as they talk from Death to Life, about their love and their war, P has lost his memory. But even their separation reveals the “bruise of love.” They are children and heroes and us.

Their love persists, even in death and these two superb actors carry us with them. “warplay” spans centuries from Homer to Home Boys in our dangerous new world. They speak our language and they express our thoughts, unforgettably.