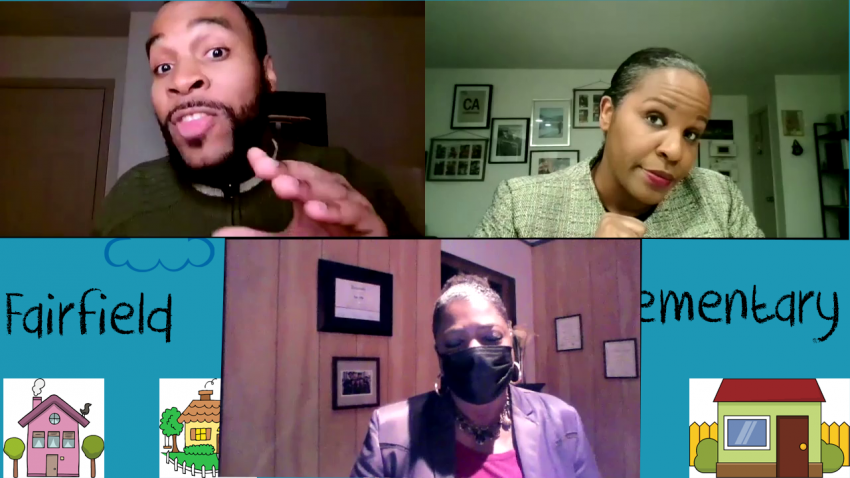 In “Fairfield,” Pear Theatre goes for over the top and hilarious. The play centers on mixed-race Fairfield School, reflecting the race and class divides that plague our country. But Eric Coble turns daily conflict into raucous comedy.

The harassed principal, the slimy superintendent, and an over-eager teacher mirror levels of authority in school and community. The clueless teacher makes disastrous phone calls to the furious parents. While the tightly-wound principal tries to talk sense, she is confronted by tirades, defensiveness, and cover-ups.

Superintendent Peter Snyder (Keith C. Marshall) confronts Principal Wadley with a racist rant. Hysterically, he sticks his face against the screen, screaming: “There aren’t enough fingers on every little Dutch boy in this city to shove in this dike’s hole!”

Even worse, Kaminski sets her kids to “play-act” slave and slave owner. So, one kid uses a paper clip chain to whip a Black student—and jaw-droppingly using the N-word! The victim shoves back, unleashing wild parental outrage, of course.

Even more outrageously, the white parents (Janine Saunders Evans and Robert Sean Campbell) are also shocked and defensive. Parents on both sides, stuck in their self-justifying manners, refuse to acknowledge their own mistakes.

Their stubbornness and marital squabbles make for many funny moments, especially when Black parent Daniel Stubbs (talented Terrance Smith) tries to rein in his wife Vanessa (volatile Jennifer De Lane Bradford). Vanessa wants to send their son to a private school because at least “it’s a more cultured racism.”

It’s a wild ride—the Black and white parents squabble—trying to justify their kids’ behavior. And the Principal gets trapped in her own educ-jargon, telling shocked parents that it could be “turned into a positive.”

No matter how badly everyone in the play wants to return to “normal,” the cracks in their idealistic façade cannot not be covered up—and the comedy boils over.

Former Black Panther Mr. Clark (terrific Terrance Smith, again) is brought in to talk about Black history. His off the rails, passionate speech about Black oppression gets the kids roaring with outrage. The root of the school’s problem is the larger systemic racism of America. But none of the adults are ready to face the lesson the children just learned.

“Fairfield” brings out wildly exaggerated degrees of crazy, but but it perfectly satirizes the consequences of tiptoeing around race.

Director Aldo Billingslea comedically communicates the deep-rooted contradictions in our own progressive ideas. The actors never fail to balance the seriousness with the hilarity of the script.

“Fairfield” manages to combine neo-liberalism and pandemonium in a rich cocktail of revelation and ridicule.