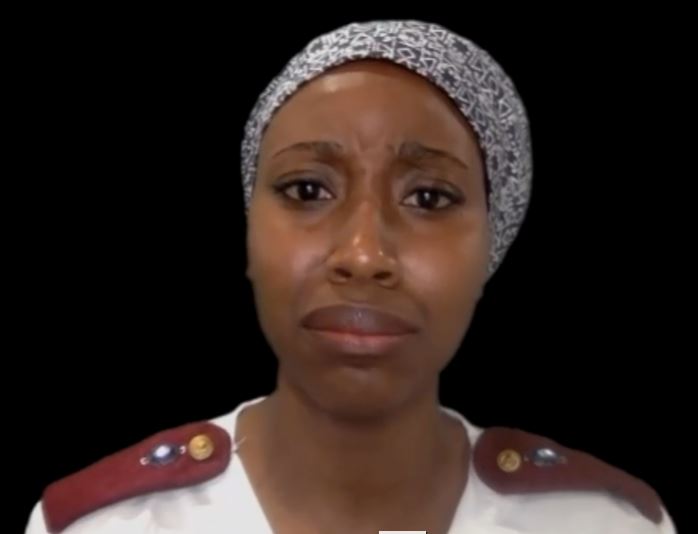 Highly esteemed director and actor L. Peter Callender has written a moving and important play he calls “Strange Courtesies” that tackles racism and hypocrisy in both South Africa, and in the U.S., today. The virtual world premiere is on line now, from The Stage, San Jose, with African American Shakespeare Company, directed by the playwright.

While South Africa suffered under legal racism, called apartheid, for 50 years, we suffer under a veneer of democracy that denies justice to Black citizens every day.

Under apartheid, we see the battered face of 16-year-old Zachariah Kwanzi (compelling Adam Green), pleading for his life— tortured by Sergeant Prinzloo (powerful Robert Sicular). Years later, Prinzloo claims he was only “doing his duty.”

Prinzloo coldly describes the last minutes of Zachi’s life, before he cut his prisoner’s throat. Zachi’s last words come from South African poet Shabbir Banoobhai: “Are you the River or Am I? Would you be different if I knew you?”

Callender has gathered an superb group of actors to depict the Truth and Reconciliation era in post-apartheid South Africa.  “Strange Courtesies” includes vivid accounts of racism, torture, and revenge.  We witness Black South Africans testifying, telling their horrific stories of oppression and murder at the hands of white supremacists.

Callender’s chilling accounts are not for the faint of heart. But the reaction of the listeners  brings hope for redemption to us. Callender’s vision shows us how Nelson Mandela led South Africans to see their oppressors in a new way.

The outstanding crew, Stage Manager Allison F. Rich and Video Editor Derrick Scocchera, create sharp angles and stark scenes that fit the screen, perfectly.  Although Zoom theater relies upon disembodied faces to carry the action, their judicious lighting and dynamic portraits transport us to the heart of the suffering Truth and Reconciliation testimonies.

As Nomusa, Zachi’s elder sister, Tshiwela Maangani turns in a compelling performance. By a twist of fate, she becomes Prinzloo’s nurse after a savage attack. Nomusa has to choose between caring for the unrepentant torturer and her own desire for revenge.

Maangani’s performance grips me powerfully because Nomusa represents all Black people or persons of color who respond to racism with far higher standards of behavior than their attackers.

Nomusa’s passion for justice struggles with her gut reaction to the man who tore apart her family.

Nomusa expresses her conviction that revenge cannot bring reconciliation. Revenge will only bring more hate. Her mother Zenzile (passionate Marjorie Johnson) cannot forgive—her emotions are written indelibly on her face.  Mother and brother Jonny (conflicted Jamey Williams) are hardened by the brutal murder that stands for so many more.

Although Callender’s play delves into the actual history of South Africa, the work speaks to us now, in America.

After 50 years of enforced, legal segregation and oppression, why should Black South Africans offer the Afrikaners the “strange courtesy” of redemption and reconciliation? Even though President Mandela created the Commissions, we still wonder at the results.

“Strange Courtesies” offers more questions than answers, as does Black Lives Matter. How can we achieve new forms of truth and reconciliation in America? Callender’s intense and analytical play on South Africa can show us the way.

“Strange Courtesies” –written and directed by L. Peter Callender, by The Stage San Jose, in collaboration with African American Shakespeare Company—Streaming at: TheStage.org – to March 8, 2021.