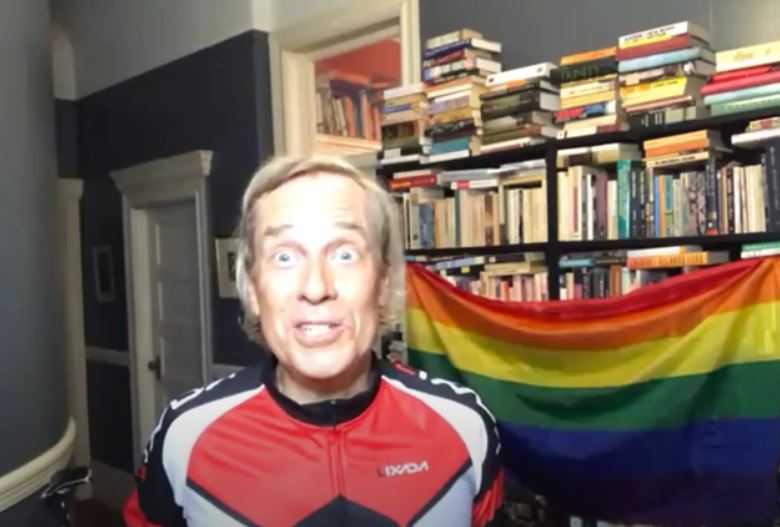 “Lone Mountain” qualifies as a travelogue, even more than a play. The action begins in John Fisher’s apartment in San Francisco, as he announces his intention to plant the Gay flag at Lone Mountain College, the gayest hill in The City.

As he prepares his bike for the journey, questions such as: Why take a bike? Why the camera with the special fish-eye lens? and Why the running commentary on the journey? These questions have little relevance in Fisher’s world and frankly, I don’t give a damn. I thoroughly enjoy the tour because I share Fisher’s enthusiasm for architecture, history, and landmarks.

Each of us carries mental roadmaps populated with landmarks unique to us. Like a tour guide on one of those motorized cable cars, Fisher shares his mental roadmap populated by gay landmarks such as the gay connection to the Anarchist bookstore Bound Together Books or the home of the famous lovers, Tracy Chapman and Alice Walker. Fisher includes the Merchants Exchange Building where his father had an office but where feminist Julia Morgan also had hers. We learn Willis Polk, the architect for the building, favored its Beaux Arts style but did not like Victorians.

The beauty of the trip to Lone Mountain lies not so much in the destination as in the journey. On his bike, John traverses from Haight Ashbury to Lone Mountain. We see through his fish-eye lens how gay life is embedded in the neighborhoods that surround the peak.

Having given many tours of San Francisco and priding myself on my broad knowledge of The City I was entranced by the depth and breadth of Fisher’s accumulation of random info. As we travel past each landmark, his camera’s fish-eye lens leaves us feeling out of focus, but still interested in what is coming up.

Fisher makes the outlandish claim that Lone Mountain is the gayest mountain in the City. He makes his point as he plants the rainbow flag on the steps of the College. No matter that it is in the middle of the night as he is avoiding security guards, Jesuits, coyotes, and racoons. The humor of his assault on the hill is subtle and intriguing. Yet his actions make us wonder, Who does have the right to name or to assign meaning to a location? The answer is that we are the ones who give our world meaning.

So far, Fisher has written and performed 47 solo plays—one for each week of the pandemic. They appear every Thursday at 8:00 PM at TheRhino.org. These solo gems reveal the genius of his fertile mind. Add “Lone Mountain” to his list of trimphs, and take a ride with Fisher on his unique bicycle odyssey.

I applaud Fisher’s initiative in getting us out of the house and into the streets. He refuses to let us wallow in our quarantine misery. He reminds us that we can still enjoy theater online and the creativity that keeps us vibrant and alive. Thanks to Fisher and Theatre Rhinoceros for leading the way.

“Lone Mountain” by John Fisher, at Theatre Rhinoceros—Streaming at: YouTube

The Battle of Guadalcanal

Conceived and Performed by John Fisher

Register now and receive a Zoom Link
Or,
Go to John’s Facebook page at 8 pm Thursday