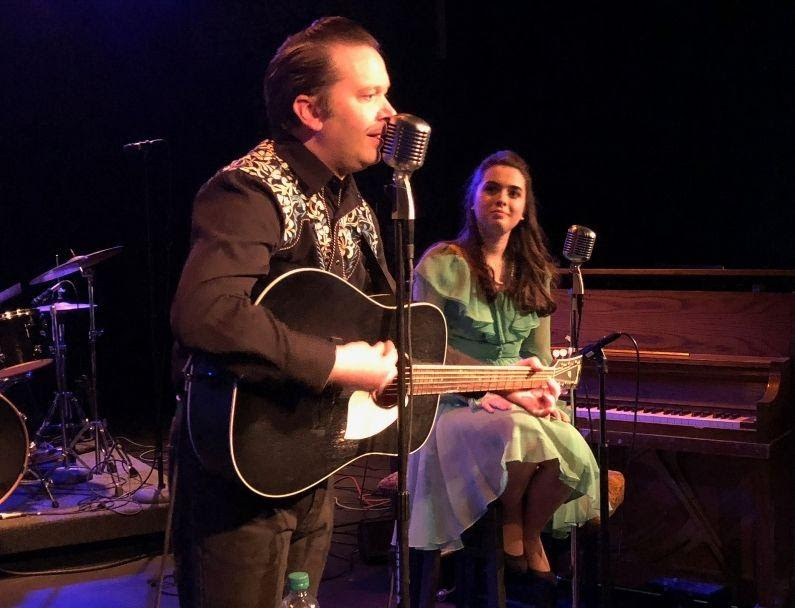 The first words of Johnny Cash’s last recorded song, “I hurt myself today,” still haunt me. Like other songs in “My Name is … Johnny Cash,” it reveals new truths about the storied career of The Man in Black. The bio-musical demonstrates that Cash pulls no punches in his music.

Steve Lasiter has a fine Bass/Baritone, different from Johnny Cash’s distinctive, gravelly voice. As the front man for a talented six-piece ensemble, Lasiter does a great job of capturing the essence of Cash without aspiring to match him.

I recall a 60s Cash concert at the Oakland Coliseum, where a rude, impatient crowd was booing the legendary Carter family who were opening.  So, Ma Maybelle stepped to the microphone and said, “Don’t worry—old silver throat will be here soon.”

As a huge Cash fan, I thrilled to hear Lasiter and Jennifer Barnaba’s new stories, complete with historic photos and video.  Stage Manager Christine Vondralee and her exceptional crew have created a visual display that beautifully enhances Cash’s life. Their production goes beyond the family album style of biopics.

Lasiter and Barnaba connect the songs to events in Johnny’s and June’s lives. When Cash recounts the loss of his brother Jack as a young man in a logging accident, we are moved. When Cash relives the flooding of his poverty-stricken family’s home on the Arkansas bottomland, little Johnny asks in song: “How high’s the water Papa?”

Often, Cash’s songs reveal his early struggles, his rugged individualism, and his addiction. Cash maintained his commitment to the poor and oppressed, never letting fame go to his head—truly a man of the people.

This show will please the legions of Johnny Cash lovers as they discover the personal roots of his music. And they will appreciate his explanation for always wearing black “for the poor and beaten down.” Blessed with a poet’s heart, Cash sings for the downtrodden at his Folsom Prison concert.

Marking the unlikely friendship between Dylan and Cash, Lasiter performs Dylan’s “A Girl from the North Country” and “It Ain’t Me Babe.” It always amazed me how Cash could take a song from an unlikely source and make it his own.

Recalling Cash’s early years, Set Designer Martin Gilbertson designs a no-frills bar room, rather than Cash’s large concert stages. The lack of pretension allowed me to concentrate on the music.

Transported by Lasiter and Barnaba’s beautiful harmonies, I enjoyed the simplicity of instrument and song. Their tribute to Cash allows us to revisit an American legend.

Rather than imitation, the show simply pays homage to Cash. As his old Highwaymen bandmates, Waylon Jennings and Willie Nelson put it: “We Sure Do Miss Johnny Cash.”