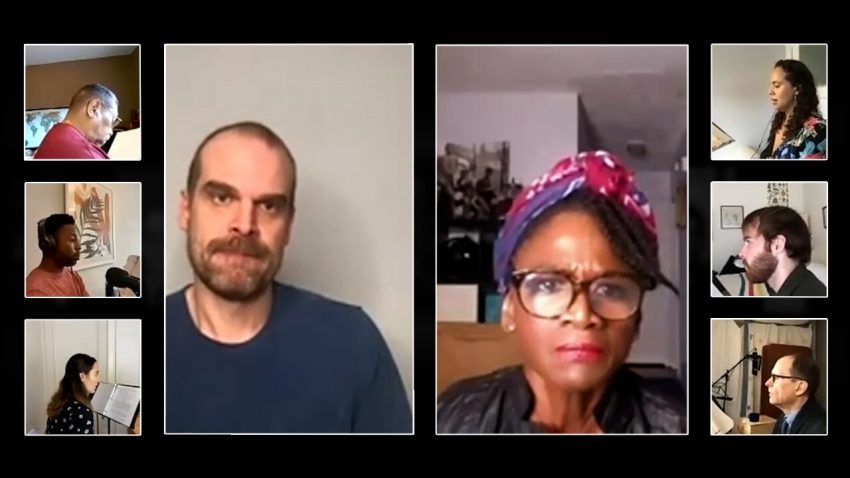 In Alice Childress’s 1957 play, “Trouble in Mind,” two titanic figures confront each other at a rehearsal of an “anti-lynching” script. The fictional script, titled “Chaos in Belleville,” takes place on a southern plantation during slavery, and it parades offensive racial stereotypes.

The arrogant director Al Manners represents liberal support for the 50s Black cause—while still looming over actual Black lives. Wiletta and Al are headed for confrontation, reflected in the following decades of protests, assassinations, and racism.

We soon see into Manners’ contorted heart. He abuses and embarrasses all the actors. Manners even takes out his wrath on subservient Stage Manager Eddie Fenton (open-hearted Johnny Rice), continually asserting privilege.

They are rehearsing “Chaos in Belleville,” which features a cowardly mass lynching on a southern plantation. This terrible history is relived in a startling monologue by wise veteran actor Sheldon Forrester (compassionate Steven Anthony Jones)—a real gem!

By Act Two, Al has questioned Wiletta’s abilities—even though she awes them with her heartfelt reading and singing. When Wiletta finally explodes, we enter the brave new world of 60s demands for equality–and we feel a great liberation.

In Director Awoye Timpo’s briskly paced production, the four Black actors represent ways of dealing with suppression. Their superb acting in even the less-developed characters reveals their identities as Americans, actors, and artists. Watch the moving Zoom boxes that rotate to remind us of stage choreography; they challenge us to follow the shifting power hierarchy.

After being humiliated by Al’s sadistic condescension, Wiletta rises like an avenging angel. Although Al announces, “Be true to yourself,” he really means, “I’m the Boss.”

The cast creates sharp characters who either enforce white privilege or who finally must question their own exploitation. Wiletta revises her “go along to get along” advice for eager young actor John Nevins (loveable Kadeem Ali Harris). Wiletta advises Millie Davis (feisty Lauren Spencer), who plays a slave girl in the play within the play, to fit in. But independent Millie has her own course to chart.

Meanwhile, naïve Yalie Judy Sears (sympathetic Eliza Kaye) tries to bond with the Black actors, even while their stage roles demean their epic struggle. When journeyman actor Bill O’Wray (multi-talented Anthony Fusco) tries to challenge Manners, he gets shut down, but politely—a contrast to the patronizing treatment of African Americans.

Only the loyal stage doorman Henry (folksy Dakin Matthews) understands Wiletta.  Henry treats her like the Queen of Theater, as she deserves.

Wrapped inside “Trouble,” hidden in the folds of “Chaos in Bellville,” playwright Alice Childress shows what it is like to be a cotton-picker in the fields of 50s New York.

Although Broadway refused to produce her sharp-edged play, Alice Childress has painted a brilliant picture of race and gender in her groundbreaking “Trouble in Mind.” See it at ACT Out Loud, ASAP.