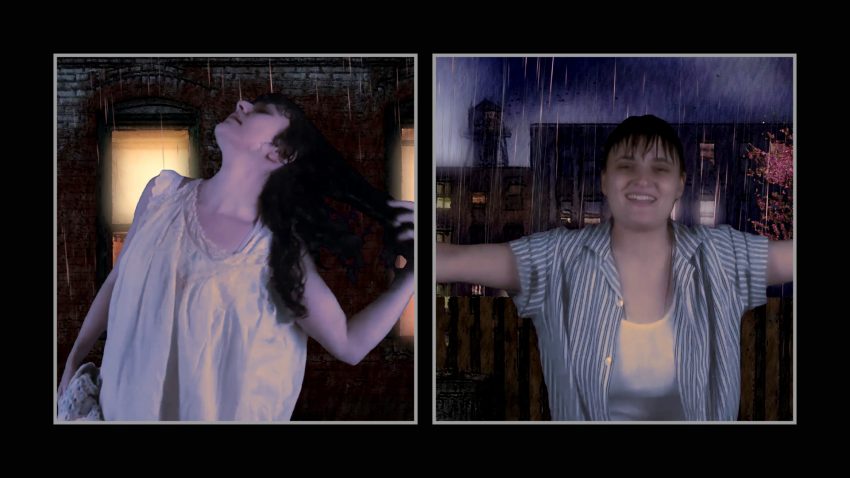 Consider a man so fearful of God that he attempts to inscribe the same fear into women under his control—his wife, his daughter and the “working girls” in the brothel he owns, downstairs.

What happens when this man, Yankl (Roni Alperin), loses control? With a special energy, Alperin goes on a shocking journey that affronts his God, updating Sholem Asch’s 1906 family tragedy to the Great Depression.

The haunting final scene clings to my mind: the family’s tenement apartment is replaced by a crushing wall of black, focusing our attention on the despairing father. Foreboding music echoes as Yankl melts down, losing control even over himself.

Earlier, Yankl asserts his middle-class aspirations against fussy, flowered 30s wallpaper, while the brothel scenes display garish colors. Four prostitutes live and work downstairs–and they are the source of Yankl’s income. The ‘upstairs’ vs. ‘downstairs’ world exposes “owner” vs. “owned,” as the workers revolt against their patriarchal boss.

Rivkeleh and Mankeh dance together in the warm rain–and kiss–a beautiful, liberating scene. Composer David Rosenfeld adds life with music that accompanies scenes that run from tender to vulgar to shocking.

Rivekeleh revolts against her harsh father, offering sheepish grins—no longer the ‘pure’ daughter.  She flees her family to join Mankeh, culminating in her own transformation. In powerful, melodramatic scenes, both daughter and sex workers rebel against Yankl’s narrow morality—taking him to the brink.

Rivkeleh’s Mom Soreh (Jill Eickmann) struggles with her own past as a sex worker, trying to give her daughter a better life. In brutal fashion, Soreh is forced to face reminders of her past,  asking the timeless question: “Is God truly forgiving?”

An older sex worker, Hindl (Esther Mulligan), plots with her sly boyfriend Shlomo (Simon Winheld) to break away from Yankl and create their own brothel. The pair constantly bicker, with Shlomo degrading Hindl with the title of ‘bitch.’

They know they won’t be able to make enough profit to survive, until they find the right kind of girl. We feel like a rock is lodged in our gut when the topic of Rivkeleh comes to the table.

Each actor was filmed separately, with footage pieced together to create the scenes. While “God” has largely been translated from Yiddish, subtitles for Yiddish phrases intertwine the languages in a fluid, fascinating collage.

Yiddish Theatre Ensemble’s “God of Vengeance” cleverly combines multiple forms of oppression that ring true today. Perhaps, given the vulgarity, it is even better suited for the modern day. We have, after all, lived under the sway of Sholem Asch’s God of Vengeance.

After a century, the play has been translated and produced in a brilliant, new way—that speaks to us in the present tense.

“God of Vengeance” by Sholem Asch, translated by Caraid O’Brien, directed by Bruce Bierman, by Yiddish Theatre Ensemble. Streaming at: YiddishTheatre – to May 31, 2021.