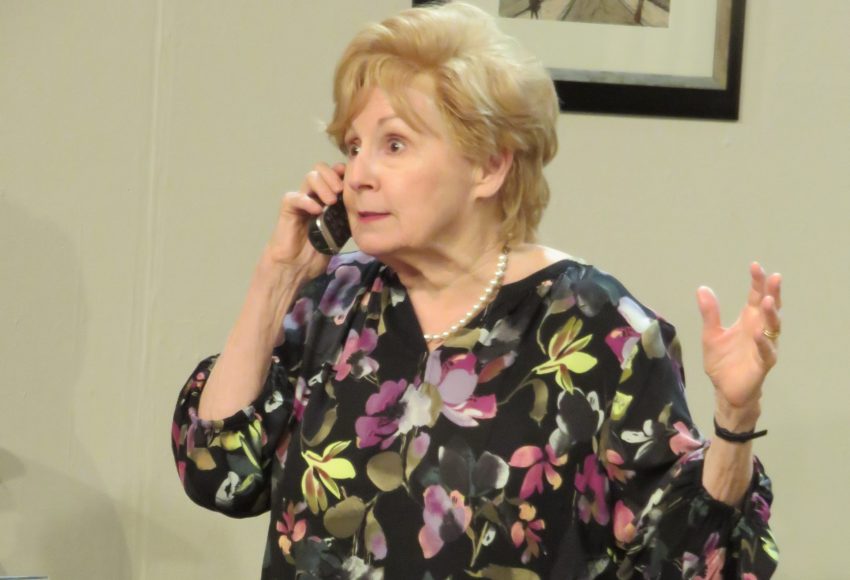 Karola Ruth Siegel was born in Germany in 1928, to Orthodox Jewish parents. She faced the loss of her family in the Holocaust, till she became America’s most famous sex therapist—writer of many books about sex, and the radio host of Sexually Speaking.

As Dr. Ruth Westheimer, Ann Woodhead engages us in a one woman show that unfolds her tragic and comic adventures over eight decades! It is refreshing to see a lost little girl rise above the terrible loneliness of a rejected orphan.

With a wry smile, Dr. Ruth jokes about studying a scandalous 50s gossip magazine: “True Confessions—this was my Dickens and my Shakespeare.”

She pulls out Ruth’s famous 1985 Game of Good Sex, where players can accumulate “arousal” points. “Sex is like a heart attack,” she quips, suddenly remembering we are watching. She shows us a photo of herself with Bill Clinton, and poses again. She makes us feel at home.

Fleeing Nazi Germany as a child on the kindertransport, Ruth is the sole survivor of her family; but she always yearns for family and home. We can see two beautiful antique doll houses that she can manipulate. In a touching scene, she imagines her family reunited, sitting in doll house chairs around a tiny table.

Her need to connect to that lost time binds St. Germain’s “Becoming Dr. Ruth.” We are reminded of so many refugees, then and now, who are abandoned and alone. Her charm and wit resurface in quips about sex and her husbands, like the fun of whipped cream, and Fred’s ten-thousand-mile birthday party for his car, Gustav.

From the boxes come her Zionist grandmother and her loving parents, who told her “to always smile.” Her father smiled when taken to the labor camp; her mother smiled when she placed Karola, alone, on the train.

After the unfriendly school for Jewish kids in Switzerland, she trains as a sniper for the Hagganah, a secret Israeli army.  Later, in the U.S., she struggles for her Ph.D in Psychology; finally becoming  an outspoken sex therapist. Woodhead depicts Dr. Ruth’s inner strength—a model of perseverance.

Variations of Wayne King’s “You Are My Sunshine” leave a melancholy feeling in the air as Dr. Ruth discusses her three weddings. She always turned around to “look for mama and papa.”

Yet those pains never subdue her optimism because the sunshine of her smile beams through her sadness. At one point she stops, answers the phone, and assures a man that his penis is not too small.

At Cinnabar, Woodhead and Craven have created a poignant portrait of a survivor.