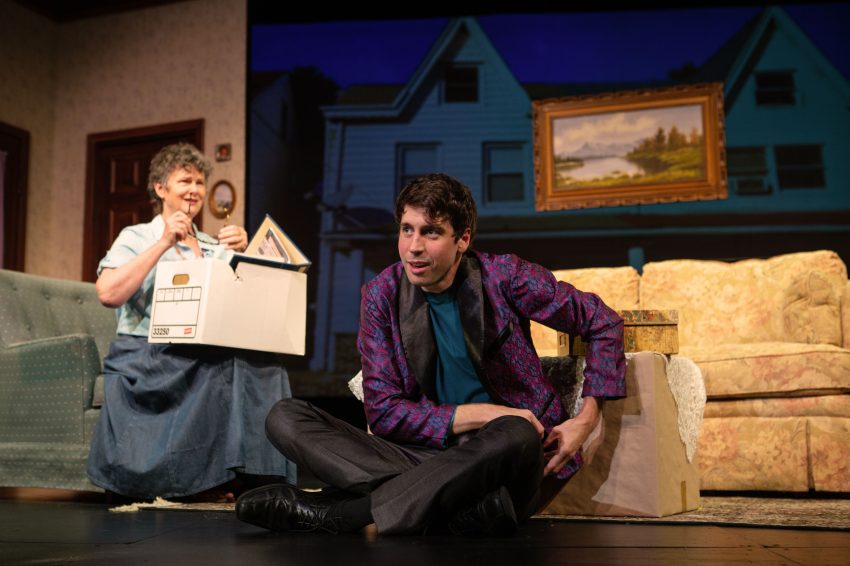 “The Song of Summer,” a comedy by Lauren Yee, follows the rocky romance between a pop star and his long lost hometown girlfriend. Yee introduces us to the downtrodden citizens of a former coal mining town who live with unrealized hopes and vanished dreams.

Uptight singer and one-hit wonder Robbie (sensitive Jeremy Kahn) has topped the charts with his hit summer song. But the song has a questionable refrain: “Girl, I wanna empower you to make a bad decision.” The words are suddenly considered “rape-y,” igniting #MeToo wrath.

When Robbie flees a booing audience, he ends up at the home of his childhood piano teacher, loving Mrs. C. (compassionate Anne Darragh). In her inviting living room, stacked boxes are everywhere, crammed with her former students’ work.

Darragh’s Mrs. C., a wonderful comic character, is slightly spacey, but spreads understanding and warmth. She hoards the work of her former students and keeps secrets with a smile.

When Mrs. C’s adopted daughter Tina turns up, the tone changes sharply. Tina (powerful Monica Ho) is Robbie’s angry, tough-talking ex-girlfriend; clearly, she is shocked to see him again. Quick-witted Tina attacks Robbie with questions about his aimless life. He got out of Pottsville—and she did not—so her character is stuck on that angry note.

Tina and Robbie are artifacts of a town frozen in time—he’s indecisive, she’s contentious. Tina’s constant combativeness and Robbie’s endless weakness take their toll. Early on, Robbie claims that Tina “is a 7 and I am a 4,” with his typical defeatism.

When Tina and Robbie’s voices meld in song, they reignite their old flame—blending in comedic harmony. Yet, smoldering under their roller coaster debates, we see cultural and racial prejudices simmering.

Bringing a breath of fresh life, Robbie’s manager Joe (charismatic Reggie D. White) bursts in, trying to get Robbie back on the road to stardom and out of this dead-end town. With welcome flair, White brings honesty and humor. Joe operates like a master manipulator, and we love his wit and charm. Joe deals with the press skillfully: “Your song doesn’t degrade women, it empowers them,” he claims, spinning the crisis.

Even Tina combats racism when she retorts to the question of why she didn’t become a doctor: “Why, just because I’m Asian?” Yee’s play is sprinkled with these gestures to the American sense of justice, but they don’t always land.

“The Song of Summer,” at times delightful and funny, leaves several verses unsung. At the last moment, the play shines a glimmer of hope into the life of the couple and the town—for a surprising climax that will touch you.