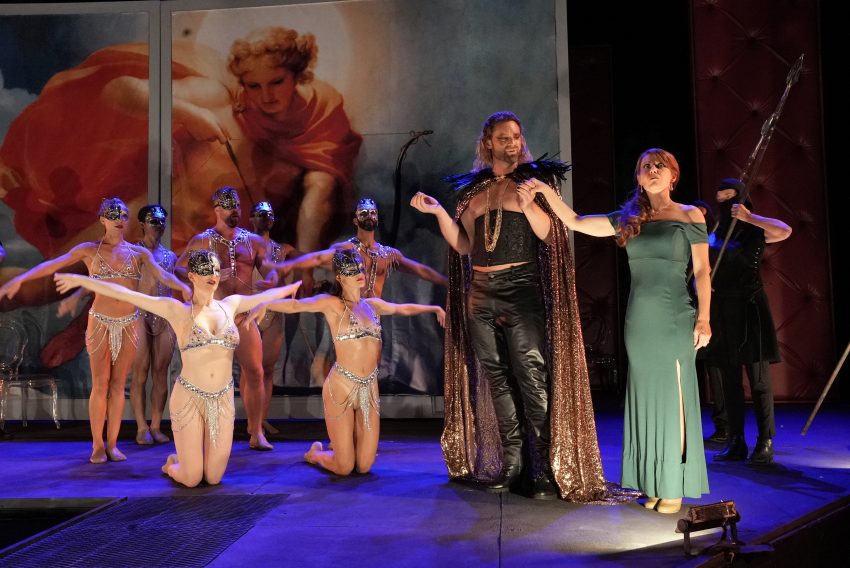 This was the first time I’d attended a performance of Francesco Cavalli’s “Eliogabalo,” loosely based on the life of the infamous Roman emperor Heliogabalus, and I was a little anxious because the 1667 opera was not performed until 1999.

What could be wrong with it?

I needn’t have worried. Director Mark Streshinsky has come up with a wild romp on a serious subject. The utterly corrupt and ruthless young emperor proclaims, “I’m famous for my infidelity; the law does not apply to me!”

Perhaps the 332-year delay in staging the opera was because the killing of kings by their bodyguards has always been a sore topic for rulers. Or was it simply too risqué, even for the Baroque era? Or maybe Venetian politics blocked it.

The supertitles, from the Italian, tell us: “If a king commands it, it’s fine to be cruel.” Rape, crassness, and rebellion are the order of the day in the dangerous corridors where only power matters. As one of Eliogabalo’s victims laments, “To be the lover of the Emperor, I must lie to myself even more.”

The ruthless sycophant Lenia is humorously played by Jean Paul Jones in a modern tight skirt, handbag, and heels. Jones skillfully changes both dresses and vocal registers, while delivering witty asides in English.

The royal guards and henchmen wear a mix of ancient Roman and modern Ninja costumes. The emperor’s minions and lackeys do a marvelous job of stylized dancing—with see-through robes, cross-dressing, and exposed skin galore.

Giuliano (Matheus Coura) does the emperor’s bidding as an excellent countertenor, and the loyal but misguided Alessandro (Derek Chester), does a good job singing tenor.

The sopranos, however, provide the best singing of the evening, with Nikki Einfeld as Gemmira, a virtuous woman the emperor seeks to bed, and Aura Veruni as Eritea, another victim of the emperor’s desires. They especially inspire with beautiful coloratura. Shawnette Sulker, as Atilia, adds her lovely voice.

In the third act, these women’s rebellion grows vocally enthralling. Gemmira and Eritea’s duet counter the emperor’s dangerous banter, which becomes more sinister with his jealous plot to kill loyal Alessandro. Power attacks even its friends.

The musicians are ingeniously placed in a pit in the middle of the stage with the head of harpsichordist/conductor Adam Pearl popping out to cue the recitative.

Too bad we missed seeing Richard Savino playing the theorbo, a large 17th century lute, although we get to see its long neck poking out of the pit to acknowledge the applause at the end. Farley Pearce on the cello completes the excellent musical trio, which has the sonic breadth of an entire orchestra.