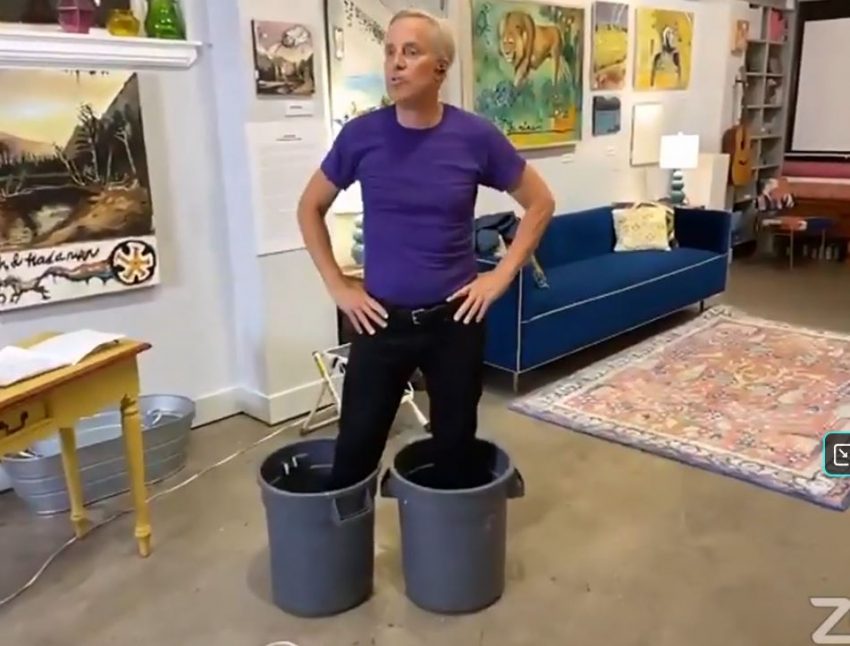 In “National Trust,” a solo show by John Fisher, we find our hero camping it up, calling into question our national priorities. His energy is infectious, his antics hilarious, as he tells us about grand houses and the heartless people who live in them.

Due to Covid, there are only two invited members in the audience. He gives one member a guitar asking him to provide atonal music. When he protests that he does not know how to play guitar, Fisher replies: “Just play bad music.”

Fisher dashes up and down the Spark Arts Gallery as he acts out his stories—finding props helter-skelter, checking his script for cues. It’s a fascinating insight into his fertile imagination, delighting us with Fisher’s charm and wit. Writer/director/actor John Fisher has a genius for uncovering meaning in everyday life.

Fisher flashes a photo of his pretentious childhood home in Marin County, a mansion with white columns right out of Gone with the Wind. But ownership of a great house brings great problems. Having to maintain appearances meant that the house was never really a “home” and his parents breathed a sigh of relief when they sold it.

The fabulous family mansion only comes to life when the real estate “stagers” put a little love into it, at last. Money spells love in old Marin.

The friends and family he trots out who inhabit these pretentious Marin mansions are hilarious, but each of them has secrets to keep hidden. They all put on fake faces and live in big, loveless houses. Even his treasured godmother turns out to be hiding a feud between her two kids, which ends in a terrible accident caused by a malicious sister. John’s imitations take our breath away. 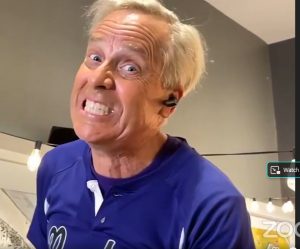 So, when he and husband Michael take a vacation to England, they make a point to visit the grand estates run by the British National Trust. The National Trust is England’s effort to preserve houses and gardens that recall fading English imperialism. You can see the delight in his eyes as Fisher gives in to his unabashed enthusiasm about the art in these grand houses. Fisher comically jogs in place while he recounts how they rush from one over-decorated estate to the next.

The National Trust preserves many of the grand ancestral estates that have become too expensive for their noble owners to maintain. They have a new life as museums for tourists, mostly Americans obsessed with all things ‘royal.’  The American longing for aristocratic life is reflected in our adulation of the Downton Abbey series. Fisher notes that these grand houses with servant quarters and walled courtyards glorify the separation of bosses and servants.

Although Fisher tells many random stories, the description of his loveless home in Marin mirrors the emptiness of those British estates. 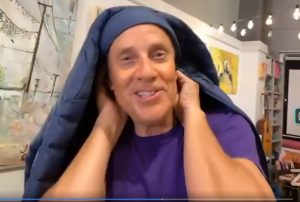 Despite our fascination with the beauty of these elegant National Trust homes they have a dark side.  As enjoyable as it is to see these magnificent estates, we cannot ignore what they stood for.

In contrast, Fisher concludes that Michael and he are content in their apartment in San Francisco, rather than being burdened by a heartless showplace like his childhood home.

“National Trust” will make you think about why some people have so much—big houses, security, arrogance, and heartlessness—while others have nothing at all—waiting to be swept away by the next flood or famine or virus. After watching Fisher camp it up heartless houses vs. homes with love, you may want to question our “national trust,” too. 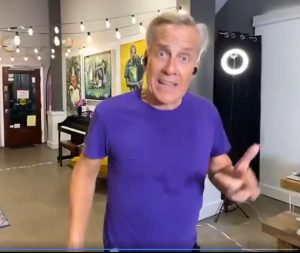