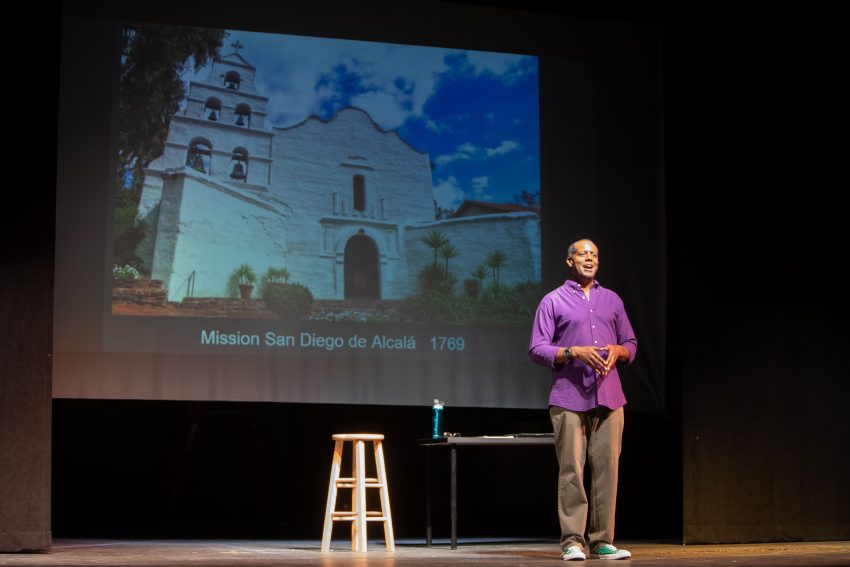 Using his personal tour of the 21 Spanish missions across California, soft-spoken Fred Pitts has fashioned an intriguing, three-dimensional show that unveils centuries of corruption and bigotry aimed at Native Americans.

By mixing California history, personal encounters, and surprising interactions with other tourists, Pitts’ solo show—which I saw online—weaves an impressive story of cultural ignorance and massacre.

Pitts points out that our history is inundated with cover-ups of subjugation and oppression of Native people. In this case, the Spanish and their Franciscan priests tortured and abused Native Americans in the mission churches from San Diego to Sonoma.

Wearing a bright purple shirt and professorial air, Pitts paces between a single stool and a desk piled with photos. He tells us that in 2012, his love of churches encouraged him to visit all the missions on a seven-day trip. Photos of beautiful missions pop up behind him as he recounts the missions’ founding, design, and other tidbits he calls “factoids.” For example: Did you know that each mission is a one-day horseback ride from the next?

They forced the Natives to work for the missions, confined them in cells, and murdered those who would not submit. Pitts learns that 4,000 Native Americans died at Mission San Juan Bautista—only to find out later that 19,000 perished at that one mission!

I expected Pitts’ accounts to be dry, but he is adroit in unfolding his tales. Pitts channels each character with aplomb—moving from the tourists to his grandmother—then returning seamlessly to his inquisitive self. Director ShawnJ West keeps the production tight, with pacing that holds our attention.

Brought up in a mostly a white Ohio neighborhood, Pitts shares his own encounters with racial prejudice. He quotes his charismatic grandma, and shows us how she dealt with racists, using discreet, subtle insults. She met racism with: “Bless, you love”—meaning: “I don’t mean to hurt your feelings, but you’re kind of an idiot.”

I wondered if the Native people had a secret language to preserve their identity, dignity, and at the same time insult those priests.

Pitts skillfully recreates the familiar “Aren’t You …?” syndrome—where whites mistake him for any famous Black man.  He imitates the staring Mission tourists who ask, “Aren’t you the guy, you know the one in that movie?” This clueless question is repeated over and over. Pitts pulls a photo of the person mentioned from the desk and places it next to his face for comic relief.

Although the tourists’ insensitivity hardly equals the Spanish genocide of an entire culture, Pitts makes a crucial connection. In his engaging travelogue, he shows the range of intolerance between races and cultures. He gently unveils the candy-coated history that covers genocide.

“Aren’t You …?” will always be a timely, important show, offering surprises, factoids, and existential awareness.

And most importantly, Fred Pitts’ fascinating journey into California’s monastic temples of deceit reminds us of countless cultures slaughtered through colonization and greed.

Don’t miss this one.