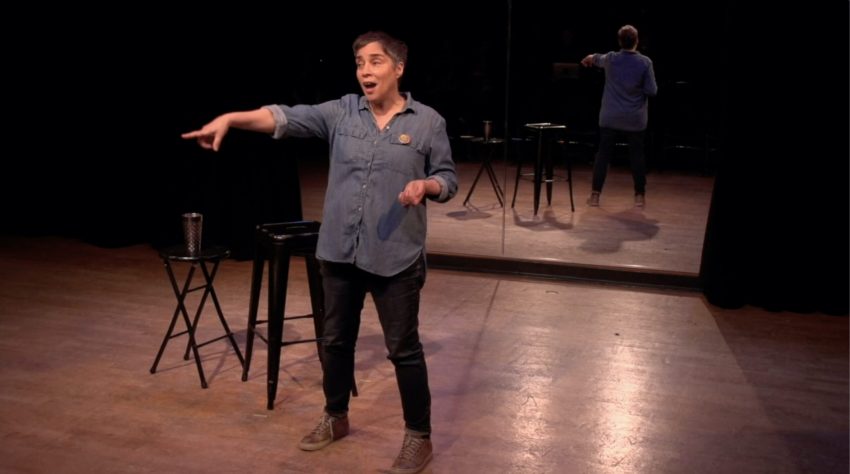 Marga Gomez charms with her wry smile as she regales us with the story of her Catholic school girlhood in Washington Heights, next to Harlem in New York City. For a bright young girl, it’s always a dark comedy poised between adventure and escape.

What a grand storyteller she is—bringing the past to life so many years later. Marvelous Marga casts that knowing look at us and we slip into the mind of an innocent, budding lesbian.

The Stonewall uprising gave her a clue that she could one day break out of the closet. But she starts with a naïve romance with another outcast, Agamemnon Perez, Jr., known as “Scotty.” He was also gay and also didn’t know it.

Living their lives under the rigid rules of tough, nasty Sister Kevin back in Catholic elementary school, they both suffer. Her outsider status sticks with her all her life, even after coming out.

In fact, “Spanking Machine” reveals the cost of oppression and suppression of sexual desires. How can religious people justify intimidating and abusing little kids like that?

Marga Gomez is the top flight comic chronicler of sexual and social warfare—and she warms our hearts. She also reveals the secret of the “Spanking Machine” at their torturous Catholic school—a brilliant stroke.

With her comic flair and warm heart, young Marga seeks alliance with other outsiders. Scotty called her Marguerite and they try kissing in the family apartment. Neither even know they are gay. They don’t even know it, yet—leading to some wonderfully funny moments under the eyes of clueless and cruel grown-ups.

Marguerite and Scotty, under their “Irish” names, terrorize the Washington Heights neighborhood and call themselves “terriblists.” They go up the down escalator, spray spit, and watch hours of “Dark Shadows”—a vampire soap opera. The vampire is the ultimate “outsider,” so she identifies with him from the start.

Forty years later, when she finds Agamemnon on Facebook, she gets on a plane—at her own expense—to take up his dubious invitation to visit him in Miami. But Marga is on a secret mission.

Gomez paints a picture of the older Scotty in Miami—thinking he must be an art dealer or cocaine dealer in Florida—”not San Francisco rich, but Miami rich”—a much bigger deal.

Along the way, Marga confides in us about men who lured her and tried to rape her when she was a young girl of nine or ten. She manages to escape by breaking shelves of pottery on one creep’s shelves. Her stories, both comic and dark, reveal how girls are used and abused.

In Miami, all is not what it seems—and Scotty cannot be as honest as our Marga. Even though he says, “I am a gay, too,” Marga’s sharp wit reveals a startling and shocking climax.

Marga Gomez, master storyteller and comedian, makes the hour fly by—and she confronts us with some home truths about being the woman she is meant to be. We laugh out loud and love her every step of the way—a bright light of lesbian love.