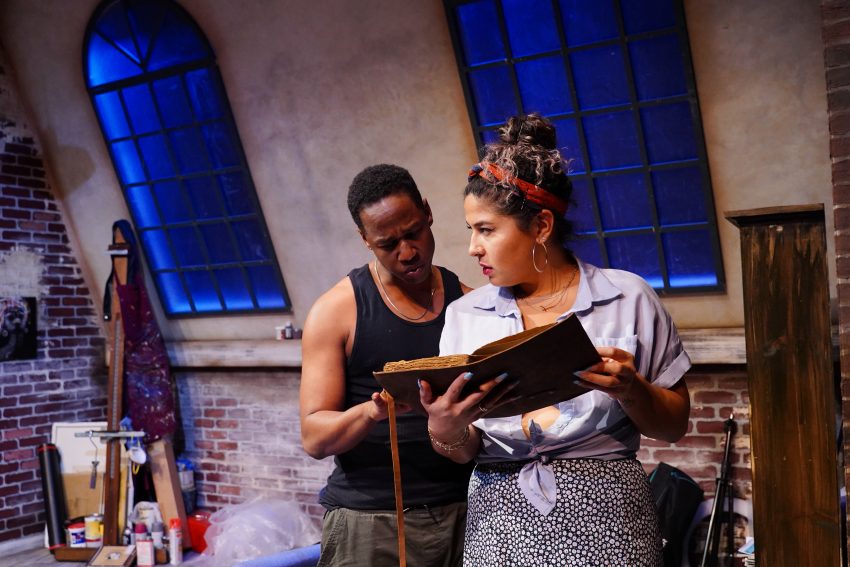 “The Displaced” is not your run-of-the-mill horror story. Playwright Isaac Gómez gives us a bright, young interracial couple whose haunted past manifests itself, physically. The energy and chemistry in this two-person play is exhilarating.

Marisa (Jordan Maria Don) and Lev (Troy Rockett) make a believable Latina and Black couple, but we soon get a taste of the delectable secrets they both struggle to hide.

Slowly, we learn that Marisa, a Mexican American artist, and her boyfriend Lev are facing—or avoiding—serious problems. They both have unexplored issues about race and their past they are trying hard to ignore.

The supposedly loving couple soon are prodding each other’s weaknesses. Marisa accuses him of being constantly distracted by text messages and ignoring her, while Lev is forgetful and passive.

Their spacious and airy Chicago apartment in an older Mexican neighborhood is lovingly designed and detailed by scenic designer Carlos Aceves—giving the set a realistic look with high skylights and brick walls.

As they dance around personal and political issues, they realize something is going wrong in their new apartment. They have moved into an old Mexican American neighborhood, and talk glibly about their role in gentrification. But odd noises begin to echo in the apartment.

In fact, every time they get close or affectionate, something goes wrong–and horrors seem to creep in.  Their Alexa begins misbehaving, too–with a mind of her own. In the run down apartment, they are attacked by subtle sounds and earthquake-like shakes. Bravo to directors Mina Morita and Karina Gutiérrez, and to Special Effects by Devon LaBelle for frightening us with mounting horrors.

Marisa, unaware of her privileges as a light skinned woman, plays an aggressive role. She attacks her partner and plays on his insecurities—playing the colorism card. She is a realistic creation; I have met many Marisas in real life.

Even though she is educated and artistic, she is a fake ‘woke’ millennial who sees the world through a selfish personal perspective. She has trouble dealing with the world when the unexpected pops up. And we take the exciting trip right with her. Detached from her heritage, Marisa struggles to fight what is happening now.

Marisa has separated herself from the “other” Mexicans, claiming she is different. She represents those who have turned their backs on their origins.

As a Black male, Lev is expected to demonstrate masculine traits; but he is lured by the past, like a siren’s call. Lev, the more puzzling of the two, hides his motivations. We wonder why he is with Marisa at all—but we never find out. Marisa’s forcefulness prevents Lev from revealing his story. We get only fragments of his life.

The “Displaced” explores the demons that travel with us—represented by burjas, tarot cards, and flickering lights. Gómez’s bloody terrors show that we cannot run away from the past. Marisa and Lev represent our generation’s questions. They keep us on the edge right to the end. In fact, there are two endings that you can see at separate performances—another special twist to their fates.