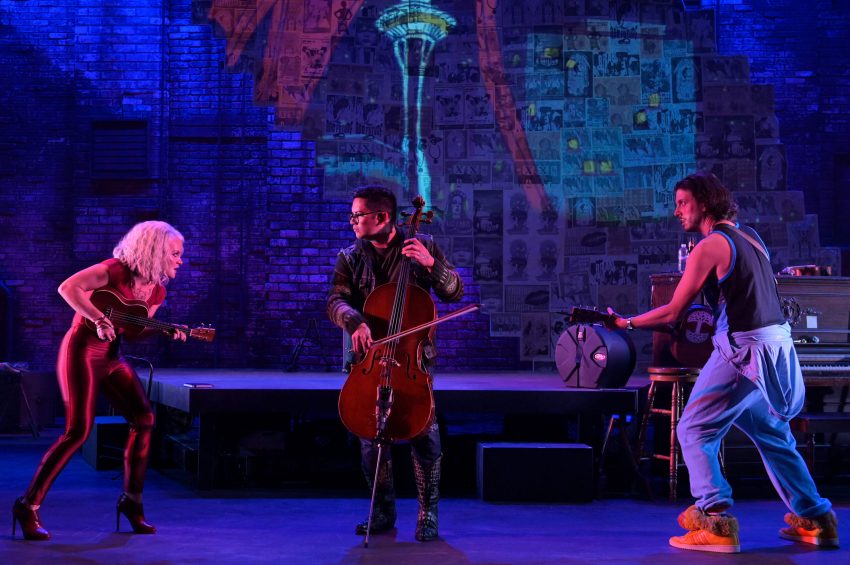 “Lizard Boy” is set to tour four continents next year and Justin Huertas’ “Terrible Ride” has nearly a   million hits on Spotify. I’m excited to listen to the album, skipping only two songs. Rather than a soundtrack, it’s a music album composed by an honest actor. “Lizard Boy” is not a musical: it is a concert put on by talented in sync thespians.

An amazing trio, Huertas, Kirsten “Kiki” deLohr Helland, and William A. Williams, play their cello, Spanish guitar, and tambourine in character. They sing like a rock band—with kazoos!  Their song “Recess” wakes me up with its wacky choices and animated choreography. Each actor plays several instruments, and Williams beat-boxes, using his hands for percussion.

I’ve never felt so entertained and underwhelmed at the same time because the music is stirring, but the story is thin.  While the dialogue often falls short, the music is phenomenal—like bubblegum punk rock music from the early 2000s. Think Green Day, Paramore, Yellow Card. The twist—Spanish instruments and a ukulele.

Their instrument cases become furniture as we watch Trevor a.k.a Lizard Boy (campy Justin Huertas) talking to his drawings about going outside for the first time in a year. Despite his scaly green “skin,” Seattle’s annual Monster Festival allows him to fit in for one day. In fact, he’s not very green, but the costume designer has added sparse blotches of holographic green glitter. But he’s more hipster than alien.

Trevor starts out like a Marvel superhero: pop culture geeks will feel at home with “Lizard Boy.” But alas, Trevor goes on, in monologue after monologue, about how alienated he is, and how the world has rejected him.

Unlikable Trevor meets another wonderfully unlikable character, Cary (animated Williams) on a dating app. Williams, a movement master in colorful boxer briefs, Cary creeps his hands along Trevor’s skin, making us cringe. When Cary goes for sex, we laugh as Huertas looks him up and down, saying, “As if.”

Out of nowhere, a mysterious platinum blonde (Kirsten “Kiki” deLohr Helland) accompanies the two men, singing with an egg shaker, piano, and background vocals. When she is done slinking in the background, she gives us a fresh punk rock debut as Siren

Siren emerges to finally move the story forward, as she provides a familiar anti-hero vibe to the comic style.

Although the   characters demonstrate a need for connection, they fear intimacy.  It takes more courage and emotional intelligence to make friends. They find excuses to disconnect from people. Trevor uses his skin, Cary uses sex, and Siren uses her self-imposed mission to save humanity.

We are finally inspired by Trevor’s metamorphosis from a guy blaming the world to a person taking responsibility for himself.  When Justin uses his new powers, he reminds us that we can be our own superhero– an identity movement from within.

As Audrey Lorde says, “Caring for myself is not self-indulgence, it is self-preservation, and that is an act of political warfare.” These comic book heroes learn the lesson and survive, musically.