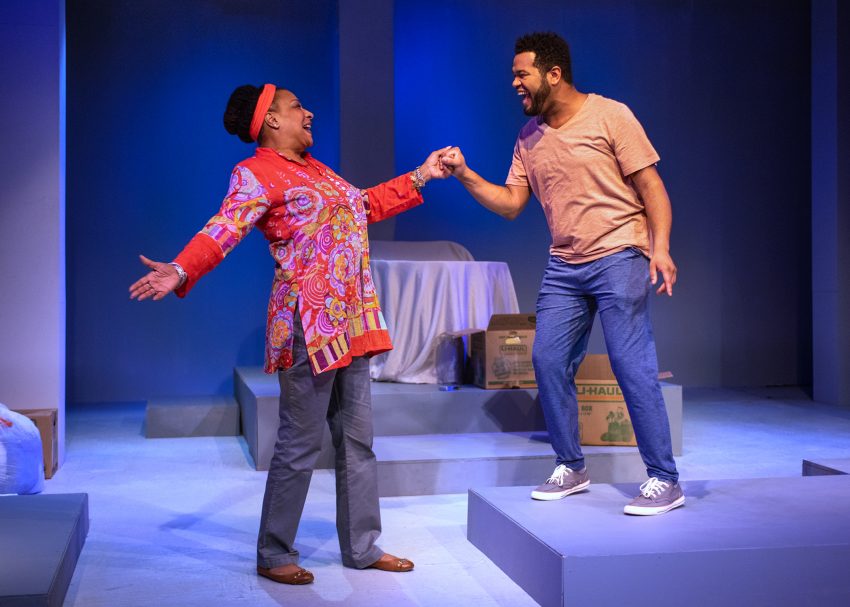 We Americans put intense pressure on each other to conform and follow the herd. When we break away from strict guidelines, others will remind us to “straighten up” and “fly right.”  We internalize identities that don’t really fit us.

But who are we if we reject conforming to middle class standards? How can we be gay or Black or artists on our own terms?

On a striking grey set, full of lines and angles, Jesse Howard slouches around in muted colors—a perfect canvas to create a new identity. Time and space seem otherworldly, with drapery and videos to express our hero’s anxiety. The modern set and Jesse’s poetic wanderings take us to a deep place in his soul.

Playwright Harrison David Rivers shows us his reflection in Jesse  (boisterous Donald Ray Antoine), who travels back to his childhood home in Manhattan, Kansas. Laid up there like a ship in dry-dock, he has to stay with his parents during COVID. But one crisis breeds another.

He’s an accomplished writer, traveler, and teacher—but at 34, he’s having a breakdown. an

Antoine presents Jesse as an insecure but honest guy who has seen the world: he just left Luca, a boyfriend in Rome. And he tells us of the love of his life, Neil, who fought for “gay liberation” all his life–until he became a victim of a violent hate crime.

As Jesse goes through old tapes and boxes in the basement, confessing his fears to us, he charms and wins us over. Jessie recounts the anxieties of being Black, gay, and a writer–all while still searching for his voice.

I find myself fully connecting to Jesse’s dilemma: The version of himself that his parents see is someone he wants to forget about. It is no wonder he puts up walls around himself when they remind him of the past.

Jesse’s story reminds us to live in the present.  present, not the past.  Jesse throws away childhood trophies and high school memorabilia unceremoniously, as if his old self must be discarded. When he relives  his idyllic upbringing, all  those sexual and racial obstacles come flooding back and evoke our empathy.

When Jesse’s mother Sheryl (delightful Jan Hunter) enters the basement, Jesse freezes up. He is annoyed because his sprightly, funny Mom dotes on him, invading his isolation. Hunter adds a wonderful  fresh note to her son’s self-isolation.

Mom makes the play dynamic, snappy, and loving, even though Jesse becomes bratty when she comes around. The story of their reconciliation is touching and believable. Jesse has a problem, but it’s not his sparkling Mom–it’s his need to complain about her.

Sheryl shares a parent’s surprise: “We never expected to feel like we were living with a stranger. That feeling goes both ways.” Every step in their self-discovery holds my interest. Jesse reflects the coming out and growing up faced by those who feel like  “outsiders.”

Jesse’s poetic interior journey, helped by lovely projections of sky and water drops, breaks down the barriers between himself and the world. He takes a beautiful path to being his own man.