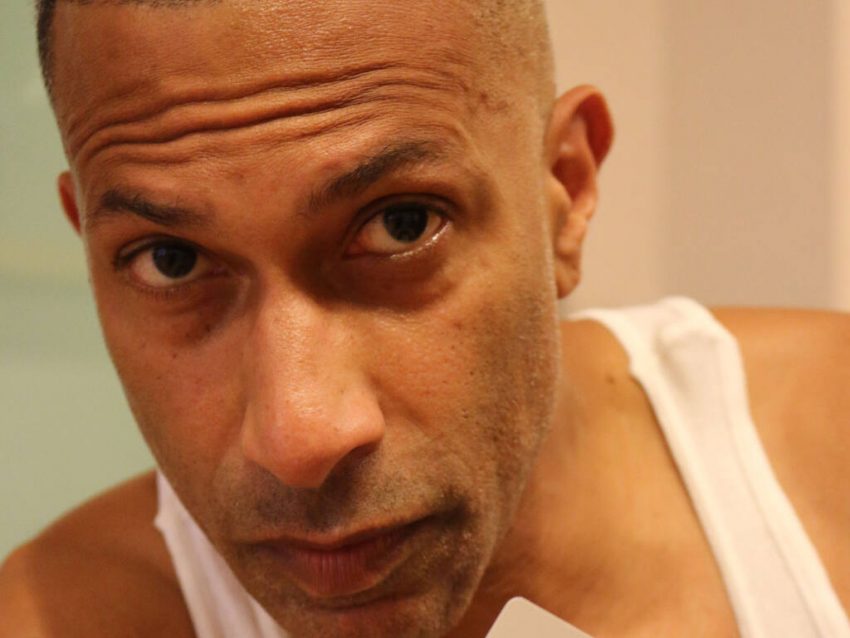 In her 2002 Pulitzer Prize-winning play, Suzan-Lori Parks creates a fantasy shared by two brothers, reflecting their confrontation with American racial conflict. She mingles the Civil War with conflicts today. It’s shocking in “Topdog/Underdog” how slavery blends so perfectly with our waves of brutality and murder.

We catch on quickly that Parks’ characters, Lincoln (talented Keene Hudson) and Booth (exuberant d’Artagnan Riviera), stand for President Lincoln and his assassin, John Wilkes Booth. As a joke, their parents gave them these fateful names.

They are living together in set designer David Lear’s convincing dark, shabby room. Lean and tall Lincoln, the elder brother, recently separated from his wife, sleeps in a recliner.

Booth, heavy and shorter, sits at a crate to practice his sleight-of-hand card game, Three-card Monte, a street con game that victims can never win. He’s trying to trick his way into the elusive American Dream: “I see the red card; you see the red card? The red card is the winner, you pick the black card, you pick the loser.” But Booth fumbles the cards.

Director Bronwen Shears creatively uses Tupac Shakur’s poem in a song: “A rose grew from a crack in the cement … keeping its dream, smelled the fresh air” to reflect the harshness of surviving in the Underdog world. The two actors sweep us up in their frustrations, backed by suggestive music and realistic settings.

After his sidekick was murdered, Linc abandoned the card hustle. Now he has an ironic job—he plays the real Lincoln at an arcade, complete with stove-pipe hat. And White people pay to shoot him! But he needs the money.

Linc pays Booth’s rent and gives him extra money for a non-existent phone bill. Now he’s the victim—playing Topdog and angering his brother.

Booth accuses Linc of being a slave to his white arcade boss, making him an Underdog, too. Even though they joke with each other, their hostility and despair bubble up. The Civil War constantly replays itself.

Hudson splendidly portrays Linc’s calm acceptance of his ridiculous play-acting. As a black man playing Honest Abe, he captures the essence of Linc’s contradictions. Linc lives on the edge, exploited and underpaid. Worse yet, Linc fears losing his degrading job.

Eventually, Linc is replaced by a wax figure that represents white anger, the exploitation of underpaid workers, like Linc. The below minimum wage earner now wanders the streets. Linc takes to the street again to gamble.

The feeling of imminent tragedy builds throughout the play. Like a tinderbox, the growing friction of the brothers, slaves to poor conditions and racial discrimination, ignite an explosive ending.

Between people forced into the streets and police overreach, we are caught in a vice—like Linc and Booth, always at war. Their struggles are ultimately ours.

Main Stage West’s “Topdog/Underdog” takes us on a worthwhile adventure into a fantasy and invites an abundance of insights and emotions into the real world of racial unrest.