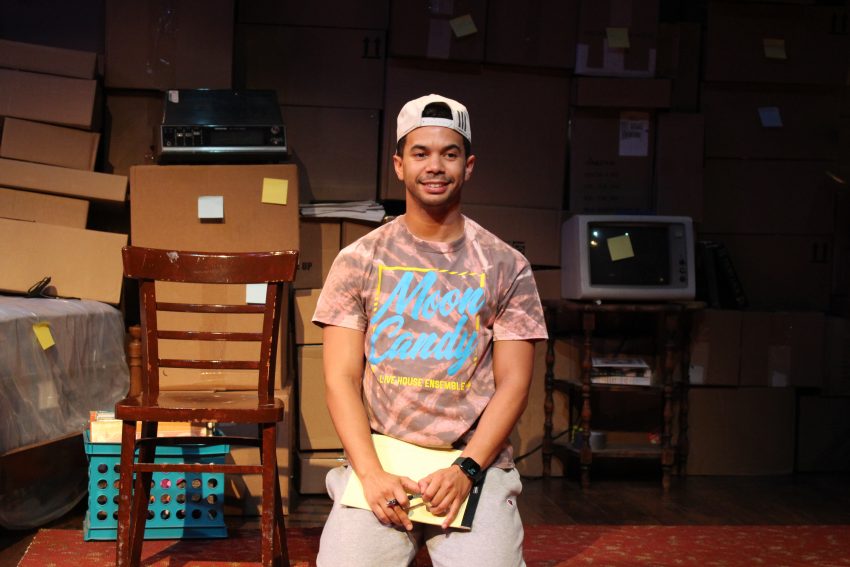 Cardboard boxes are stacked against the wall, sporting post-it notes, a life in storage. There’s a large rug, and four boxes that designer Karla Hargrave has built into an ingenious podium.

Solo performer William Thomas Hodgson watches us, waiting to begin Duncan Macmillan’s “Every Brilliant Thing,” at Oakland Theater Project. Each of us holds a mysterious card we were given at the door.

Hodgson throws off his mask and begins: “The list began after her first attempt,” and then he numbers seven items. It’s a list of all the beautiful things he could think of in the world after he was picked up, at ten years old, to see his mother in hospital.

Hodgson, the “Narrator,” asks an audience member to stand and catch something. It’s Sherlock Bones, his  ailing childhood dog.  Bones is the only embodiment of death the young boy has yet encountered. Hodgson tells the audience member that he’s now a veterinarian, come to inject this childhood dog. The “vet” is asked to repeat, “You’re doing the kind thing. It’s not a moment too soon.”

The simplicity of Sherlock Bones is breathtaking, inviting me to grieve for the young boy, and for every dog I’ve ever loved.

Sherlock Bones’ death is shocking, beautiful, setting the tone for an exquisite 60-minute odyssey.  We journey with the narrator through  life with his mother and father, and his List. While the boy’s list (The List) starts with  seven beautiful things about life; it grows to tens,  hundreds,  thousands . .

When the boy’s mother returns home from hospital, audience members briefly play the school counselor, a girlfriend, and a college lecturer. These are his chosen people, who help him face the coming storm.

Like the Narrator, the actors can be of any gender or ethnicity. We are all actors and audiences in each other’s lives. And “Every Brilliant Thing” reveals the grace that glistens in these roles.

By opening up the narrator’s world, “Every Brilliant Thing” shows us the beauty, the sadness, and  the hilarity of the instant “guest performances” that we expect of, and sometimes foist upon, each other. MacMillan invites the richest kind of audience involvement, and it works beautifully.

And William Hodgson, with his wonderful, unembellished delivery under the direction of Michael Socrates Moran, is simply fantastic. The show is beautifully lit by Stephanie Anne Johnson, and the unobtrusive sound effects are created by Elton Bradman.

Everyone can cherish this gem of a show and tuck it away in a cherished place. “Every Brilliant Thing” invites us to love all the small joys of being human and to have patience with the mysteries.

We can all attend to others’ stories, rather than shrink from sadness or laughter deemed “inappropriate.” And we can recognize that truly, we’re not alone.