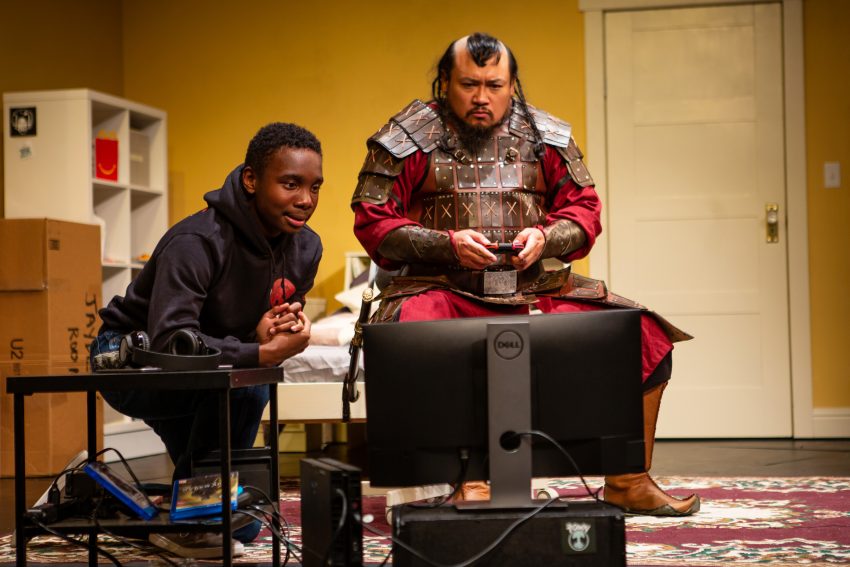 There’s a very big character in “The Great Khan” and it’s the Khan, himself, played by a wonderfully funny Brian Rivera. Playwright Michael Gene Sullivan uses the bigger than life Khan to channel a timely and important idea.

The idea is that we can learn about ourselves from other tribes, identities, and ethnicities. We don’t always have to learn from others just like us. It just takes a little research.

There’s more to identity than just the tribe we belong to—there’s childhood, innocence, imprisonment, and ideals and so much more that we can learn from our secret sharers.

In “The Great Khan,” a savvy teenager Jayden (endearing Leon Jones) meets Genghis Khan, who just happens to climb into his bedroom window one night. Of course, there’s a marvelous teenage story behind this comic visit, directed with passion and drive by Darryl V. Jones, in a co-production by S.F. Playhouse and S.F. Mime Troupe.

Thanks to a school project on Khan, assigned by the delightfully clueless history teacher Mr. Adams (droll Adam KuveNiemann), Jayden gets help from another outcast, the nerdy but brilliant Goo-Ming (hilarious Kina Kantor). They work on Khan together—with the girl leading the way.

Jayden is looking for a leader to emulate—he wants to be singular among men. He’s a Black high school student who has already risked his life to save a girl called Ant (powerful Jamella Cross). Jones and Cross win us over with their mix of rebellion and sensitivity.

Ant, named for Marie Antoinette, bursts into his bedroom window to assert her right to save herself, and not depend on him. She, too, is trying to align her tough girl identity with a warmer side she has to conceal.

Jayden’s serious, loving mom Crystal (intriguing Velina Brown) has moved them across town to save her son from attacks. Brown makes Crystal a rich character, who wants to steer her son to safety, but also tries to keep it real. Brown creates a mesmerizing Crystal, who struggles with duty and love.

So, melancholy Jayden is now stuck in a new place, out of touch with his friends, and faced with a nearly all-white school—a prison to his winged soul.

As Goo-Ming, Kantor shows Jayden how heroes can come from far away cultures and times. Thanks to her research, Jayden finds out that the Great Khan—named Temujin as a boy—also faced being overlooked, imprisoned, lost.

As the Great Khan/Temujin, Rivera tries out video games and then explains how he was shortchanged by Europeans who wrote his history. Rivera shows comic genius in his antics, tricks, and enthusiasm. He’s a forceful and magical presence; we should all have a Khan in our closets!

Jayden finds himself in Timujin’s story. With help from his clever chum Goo-Ming, Jayden finds a unexpected hero.

And they ask some basic questions, too:

Why don’t we call other peoples by the names they call themselves?

Why do Europeans get to write the histories of African and Asian peoples?

For a rousing good time, see “The Great Khan” and find wit and wisdom in his uplifting rants.