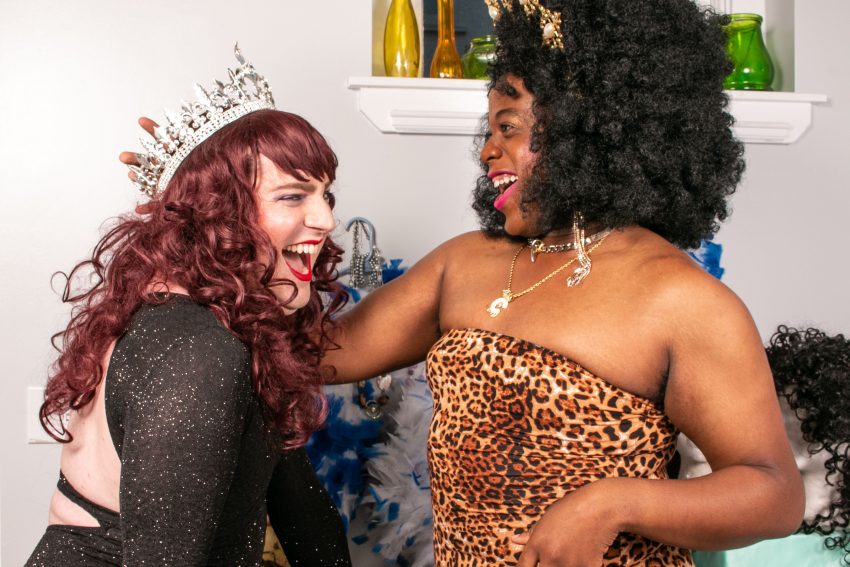 Terry Guest’s play about two drag queens in Albany, Georgia proves yet again that these gals have always been the sharp cutting edge of gay liberation.

Guest builds a stairway of poetic language to conduct Courtney (delightful Devin Cunningham) and her acolyte Vickie (marvelous Mario Mazzetti) to dizzying heights of romance and rejection. Their love is punctuated with glorious silk gowns in red and pink, as Courtney rejects  Vickie even while they love each other.

Courtney invites us to her own wake, taking us on an emotional tour of her life, after she dies at 23 years of life. She entices, then rebuffs the love offered by her protégé, Vickie Versailles, as AIDS lurks behind the curtain.

Energetically directed by Tanika Baptiste at Sparks Arts on 18th Street, Theatre Rhino brings it all home to the Castro. The spirit of Harvey Milk hovers over the potent political combo of comedy, drag, and rebellion.

Courtney has chosen to stay in rural Georgia, enjoying the sunsets over the swamps, doing drag for the locals, and fervently dishing anybody who gets too close. Defiant about her choices, Courtney poetically describes her isolation in the backwoods, as she bears suffering and disease in secret.

She traffics in cruelty and insults, a ferocious femme. As the cicadas sing to the moon, she tells us: “You gotta find a way to stand up straight in a crooked room.” She tries to stand up straight, but a Black queen in Georgia, dying at an absurdly young age, demands attention, not romance.

Vickie tries to corral her: “Anthony, if you gon tell the story tell it straight. Don’t lie to these people.” Vicky, her equal in defiance, yearns for her Drag Mother’s love—they are counterparts, after all. But Courtney prefers to remain a remote star, unavailable.

Courtney revives the grand divas—from Judy and Lisa to Diana and Whitney. Vickie channels Bernadette Peters, Shania Twain, and Baby Spice. Art becomes life, along with the pain of living. Can they impossibly connect before it’s too late?

Drag queens have always been marching in the front lines, confronting cops at Compton’s and Stonewall. As Guest’s glorious queens assert their identities, they just might inspire us to save ourselves. Queens have moved mountains before.