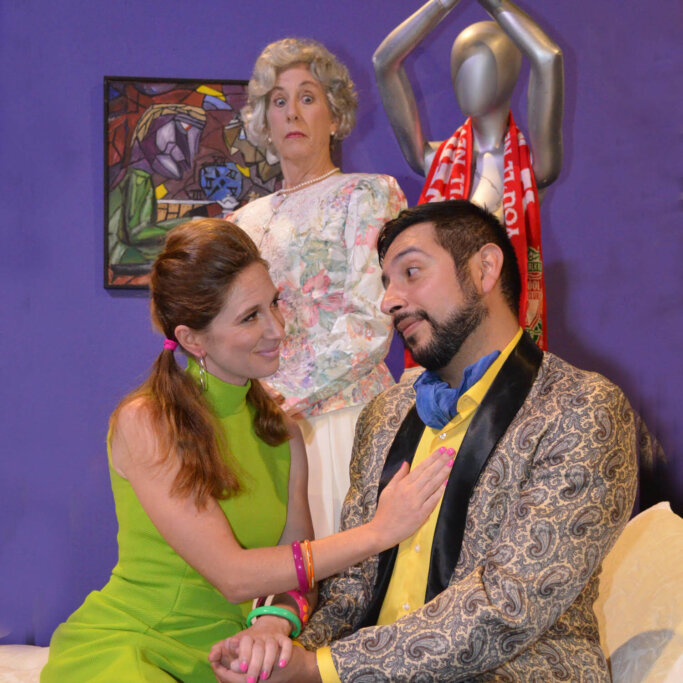 The Novato Theater Company delights us with Oscar Wilde’s keen wit and hidden messages, in “The Importance of Being Earnest, A Trivial Comedy for Serious People.” Wilde’s hilarious comedy suggests a way to liberate ourselves from rigid social rules.

“Earnest” has been staged so many times, so I wondered how director Mark Clark would capture our interest.

When Algernon professes his love for his cousin Gwendolyn Fairfax (delightful Julianne Bretan), Jack states: “The essence of romance is uncertainty.” Wilde is ridiculing Victorian certitude and rigidity, and Clark underlines the contrast with 60s fashions—opening the door to hot pink boots and Women’s Lib.

Algernon and Jack, repressed romantics, create alter egos that protect them from Victorian patriarchal condemnation. Algernon creates an imaginary, ailing friend, Bunbury, whom he can slip away to visit—while secretly gambling and courting women.

Jack creates an unruly brother, named Ernest, whom he has to constantly oversee.

Powerful Lady Augusta Bracknell (imperious Kimberly Bromley) enforces social superiority and unwavering judgements. She rejects Algernon’s proposal to marry her daughter Gwendolyn, because she will not have her daughter marry into a “cloak room and form an alliance with a parcel.”

Algernon discovers that Jack has a young, attractive ward called Cecily Cardew (delightful Gwendolyn Phair) in the country—another intriguing secret. Wilde’s farce takes off when Cecily creates her own alter ego as a woman engaged to “Ernest.” Cecily is a wild 60s rebel, complete with love letters in her diary.

Cecily has to trick her governess, Miss Laetitia Prism (Shari Clover), who lives under the ridiculous rules of decorum. Wilde creates a hilarious past for Miss Prism that includes a train station, a leather bag, and a misplaced baby.

As befits a romantic comedy, surprises burst out and marriages blossom. We are left thinking about the nature of escape in a puritanical time, with no room for independence.

Wilde asks: How do we liberate ourselves? How can an alter ego offer a bridge to a new future?

I recommend that you join the fun in “Earnest,” with an eye to exploring your own alter ego. “Earnest” still offers a million laughs, and new paths to finding ourselves.

“The Importance of Being Earnest” by Oscar Wilde, directed by Mark Clark, at Novato Theater Company. Info: NovatoTheaterCompany.org – to November 21, 2021.