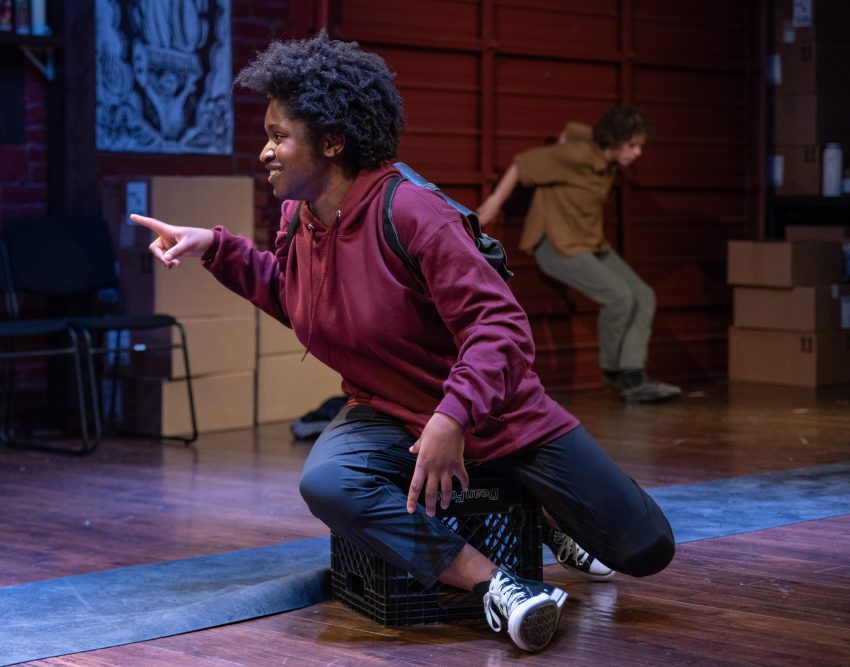 “On the night Joan was born—all the animals in all the barns and stables in the village gave voice. And I quote. “Each animal in its own tongue so loudly that everyone in the village was kept awake.”

She invokes the isolation of young women hiding in a candle warehouse while protestors and police rage outside.

Her “sAiNt jOaN (burn/burn/burn)” takes place under the eyes of saints. Hypnotic soundscape hums, as hundreds of devotional candles flicker up high, all around us, offering hope or horror—or both.

JEAN
It is in the bells
that I hear their voices.

As Jean Dark, forceful Romeo Channer embodies a worldwide youth revolt. Jean wildly challenges the world they have inherited. They are fully aware of the multiple contradictions and crises—climate, racism, greed, selfishness, lack of compassion. Jean comes from Piedmont but is magically in touch with heroic, tortured Saint Joan . . .

Each girl burns with a flame that adds luster to Jean’s intransigence.

Success Ufondu as Bell is mesmerizing as she argues powerfully that George Floyd is just one of many Black lives lost without reason. As Bell, Ufondu’s anger faces off against Jean Dark’s passion. But the old anger has not worked, and rational plans have failed. How does a Black Oakland girl cope now?

Their confrontation makes a gripping duet, adding to their symphony of views. Each girl is an instrument, playing in the face of despair.

SABRA
To keep us preoccupied.
So we don’t really notice
what’s happening in the world.

As Sabra (impressive Daniela Cervantes) articulates the demands of Latinx people who want to be treated fairly alongside the truth of #BlackLivesMatter. Sabra elegantly asserts the conditions of Brown lives. She summons forth the voices of Fruitvale and East Oakland. Her handle is #CactusRebel.

Bell’s younger sister Angie (delightful Metsehafe Eyob) seeks pleasures—she values her beauty, and rejects the anger others cherish. Her problems are teen problems, and Eyob makes us believe in Angie—who wants to be a girl, not a cause.

As May, who is Asian and Jewish, Charlotte Ying Levy brings ardor and elegance. May comes from a privileged place in the hills. She tries to blend her origin and her reasonableness with the passions of her friends, fending off accusations of white privilege.

Under the crushing weight of police corruption, melting glaciers, and fear of the “other,” where is their future? Older generations have set them up for failure. How can they forestall built-in disaster?

Watching the young voices being drowned out at COP 26 in Glasgow, we wonder how long it will take?