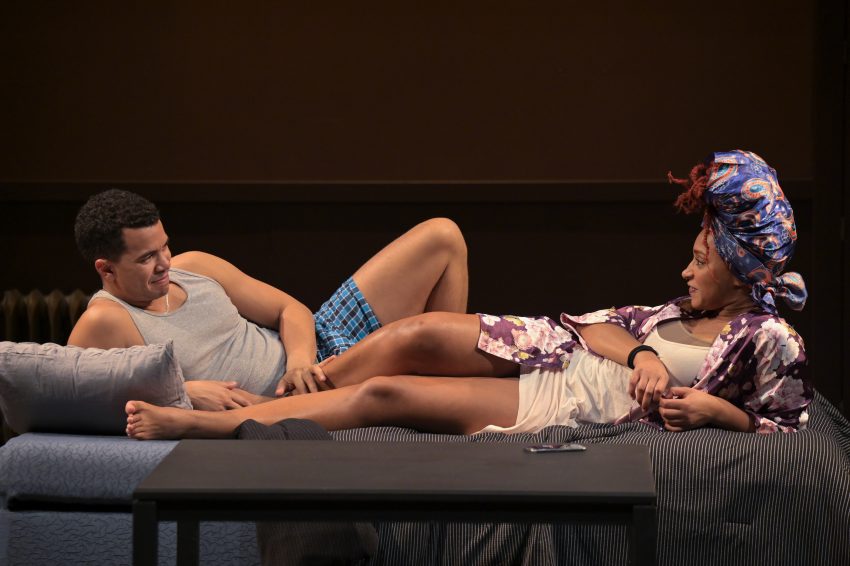 Kait Kerrigan Unravels Intimacy in Its Many Forms

“Father/Daughter” drills down into the ways that intimate relationships form and change over time. Playwright Kait Kerrigan gives us a bird’s eye view of three relationships: two male/female romantic partnerships, and one father/daughter connection.

Despite her title “Father/Daughter,” Kerrigan spends most scenes examining how the family dynamic affects the inner-workings of romance and love. Along the way, it dawns on us that father and daughter also share some traits, such as aloofness and objectivity.

The play opens with Baldwin (William Thomas Hodgson) and Risa (Sam Jackson) playfully meeting in a bar and falling in love. Then we flash, 20 years into the future, to Baldwin’s daughter Miranda and her new boyfriend, Louis. Throughout the play, we move back and forth unexpectedly between these two couples and eras, with all four roles played by the two expert actors.

Focusing on the dialogue, Director M. Graham Smith delivers a sparse setting—a table and a bed. At first, I found the starkness rather extreme. At one point, the characters are shoveling air instead of real food into their mouths. I later appreciate the dearth because I don’t want anything distracting me from their engaging words and facial expressions.

In its minimalist style, “Father/Daughter” uses the two actors to portray four characters and three relationships. Both actors play two roles, older and younger. The formidable Hodgson plays Baldwin, the father, and Louis, the boyfriend. The electric Jackson plays Risa, the stepmother, and Miranda, the daughter—challenging us to make order of complexity.

I assume Kerrigan collapses time to explore the two couples’ conflicts and contradictions in tandem. But unfortunately, this trick just doesn’t work well. It’s confusing at first, and then seems contrived.

Despite the framework, “Father/Daughter” resonates with Hodgson’s and Jackson’s raw talent. I recently enjoyed Hodgson’s mastery in “Every Brilliant Thing” and was quite taken. Now in “Father/Daughter,” Hodgson displays a fresh authenticity and charm. His visceral performance captivates me.

The same is true of the amazing Sam Jackson. She is a natural. She portrays both Risa and Miranda with ease and intensity. Her words, expressions, and movements become one narrative. Watching these two talented actors work together is enchanting.

The title “Father/Daughter” falls by the wayside because the two compelling couples occupy most of the play. We do not see the father and daughter together until the end—although they do talk probingly about each other. It’s a challenge to tease their traits out of the older and younger couples’ romantic upheavals.

The last scene brings father and daughter together, in a funny and surprising way. “Father/Daughter” finally reveals the third relationship on stage—and awkwardness dominates. It is indeed a short and sweet afterthought.

All in all, “Father/Daughter” is well worth the time and money to see these two talented local artists at the top of their game. They sweep us up in their emotional expression and character evolution.