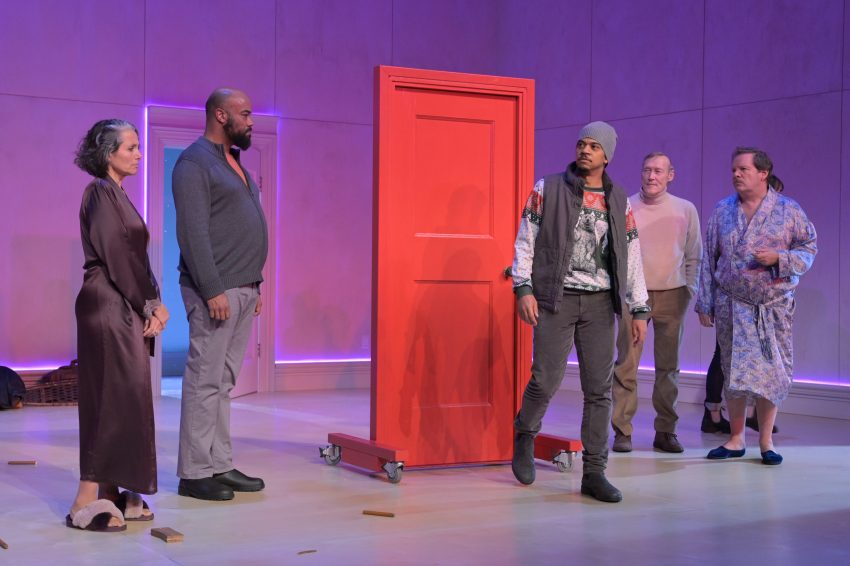 In Charles L. Mee’s absurd comedy romp, non-stop crisis and hilarious self-revelation rule the day. After a first act of squabbles and love triangles, we get to enjoy a raucous party celebrating love and trust.

When a straight Frenchman dresses up in fluffy purple lingerie to perform a lap dance for a dejected gay man, we know this ain’t your grandma’s soap opera.

These extreme characters, each one the star of their own play, use rants to confide their secrets, hopes, and fears. They argue, attack, and accuse one another—in a maelstrom of insecurity and distrust—it’s a spectacular journey.

Mee uses every kind of theater, including grand arias from opera, to give us room for reflection. The playwright sets us up for a fresh view of our lives, if we can stand to make change.

In come a delightful young couple in love, Ariel and Jonathan (Carmen Berkeley and Micah Peoples) getting away for the Holidays. Unexpectedly, out another door pop Jonathan’s mother, Maria, and her lover Francois (Nora El Samahy and Thomas Jay Ryan).

Adding to the comic confusion, enter Dad Frank and his gay lover, Edmund (James Carpenter and David Ryan Smith). They all surprise each other and jump right into misunderstandings and accusations, revealing their thin skins.

These characters embody traits of classic romance—the spurned lover, the jealous partner, the seductive rake. They live in an absurd world they cannot control, so they cannot trust even family or lovers.

Their frustration leads to an overwhelming realization—that we must accept each other as we are, and celebrate what we have. They learn to develop gratitude, over two hilarious acts.

Sparkling Lori Holt as Bertha bursts in, followed by Sharon Lockwood as her pessimistic partner Hilda. One is sweet, one is grouchy, a yin/yang pair—a lesbian Bert and Ernie.

Jonathan’s girlfriend Ariel goes off on a wonderful monologue that reveals her existential dread, her youthful hopes, and her naivete. So much so that older Francois immediately says, “Haven’t we met somewhere, before?” setting off tidal waves of jealousy.

As Bob, the local compost machine dealer, Jomar Tagatac has a crucial message to deliver. With superb artistry, Tagatac confronts this spoiled, infantile raft of lovers. With perfect poise, he says: “Do you think I’m stupid?” bursting their pretenses and “superiority.”

Edmund wheels on a bright red door frame and they each walk through it, slamming it so loud that brilliant red lights flash each time. The red door brings roars from the audience, as the slamming liberates frustration and anger.

In Act Two, “Wintertime” delivers a return to simplicity and open hearts, an end to distrust—time for gratitude, rather than jealousy.

With comic brilliance, the extraordinary cast rend their old life coverings, and dance in their underwear, discovering the power of celebration. The music swells, and our hearts expand. We feel like trusting each other and joining their ecstasy. “Wintertime” is chock-full of hilarious surprises.