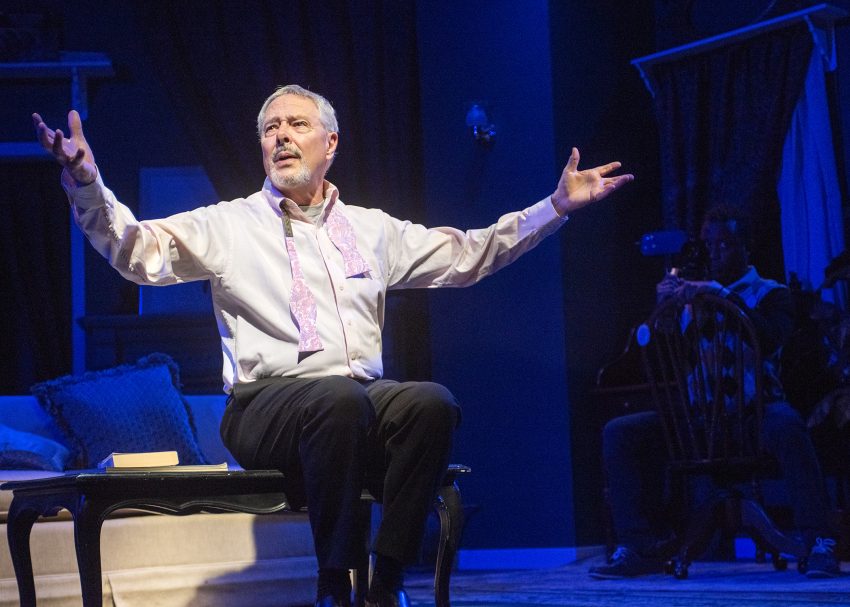 The central character of “Gently Down the Stream,” Beau, a 62-year-old gay man from New Orleans, played by the astounding Donald Currie, hypnotizes us with gentle reveries. Currie unveils Beau’s struggles with homophobia over decades—an entire history of gay oppression.

As a world-weary ex-pat American, Beau is cautious and elegant; but he’s just had a wonderful night of sex with a vivacious young stockbroker in London in 2001.  Beau is solitary, cynical, and suppressed. Thanks to Donald Currie, Beau’s story fascinates.

In Beau’s comfortable London apartment, skillfully designed by Kuo-Hao Lo, we feel at home with his old-fashioned furniture and stuffed bookshelves. Under the skilled direction of Arturo Catricala, the sexual affair turns into an intriguing long-term May/December love.

But they met on Gaydar and Beau is wary, still paying the price of living in fear:

Nonetheless, I’m old enough to be your ancestor. I shouldn’t have gone onto that
idiot machine. What kind of name is Gaydar?

Through Beau, playwright Martin Sherman dramatizes the results of generations of homophobia. The eager and complimentary 28 year old Rufus (enthusiastic Daniel Redmond) peppers him with questions, annoyingly. But love takes hold and unexpectedly stretches over years full of wit and affection.

Rufus, the clever and witty young stockbroker, wants to unearth Beau’s past as a jazz pianist for Mabel Mercer. Rufus is out and proud and fascinated by the greats of the past. They make an appealing and unexpected couple.

Donald Currie subtly embodies the pain of Beau’s alienation from friends, family, and lovers. His performance alone gives wings to this poetic play, as he recalls:

In a series of lyrical monologues, we discover Beau’s origins. When his Mafia family found out he was gay, he was told to leave The Big Easy and never return.  The speech is chilling:

I did not want to leave. You could not walk down a street in The Quarter without
hearing music. And I loved music. And I knew I’d never again see anyplace quite
as beautiful. And I haven’t.

Sherman, a master of the dramatic interlude, floats in torch songs from the 50s, reminding us of melancholy gay love in that time. Sherman has organized Beau’s memories and offered a history of gay life from the inside.

I remember how, in the 60s, we ran from the police—we ran from being exposed. That fear shut down the possibility of living a connected, authentic life.

After years together, magnificent Harry (talented Sal Mantos), a performance artist, delivers another turn of the screw. Harry sings a touching and torrid torch song when we least expect it.

It’s a great pleasure to spend time in the company of intense and witty Beau, Rufus, and Harry. Rufus offers new challenges to Beau, and his love brings new life.

Beau and Rufus exist in a constant state of negotiation, trying to align the decades between them. Will Beau figure out how to sail in uncharted waters?

“Gently down the Stream” delivers Beau’s journey with affection and authenticity: Lovely setting, powerful actors, and unforgettable lessons in love!