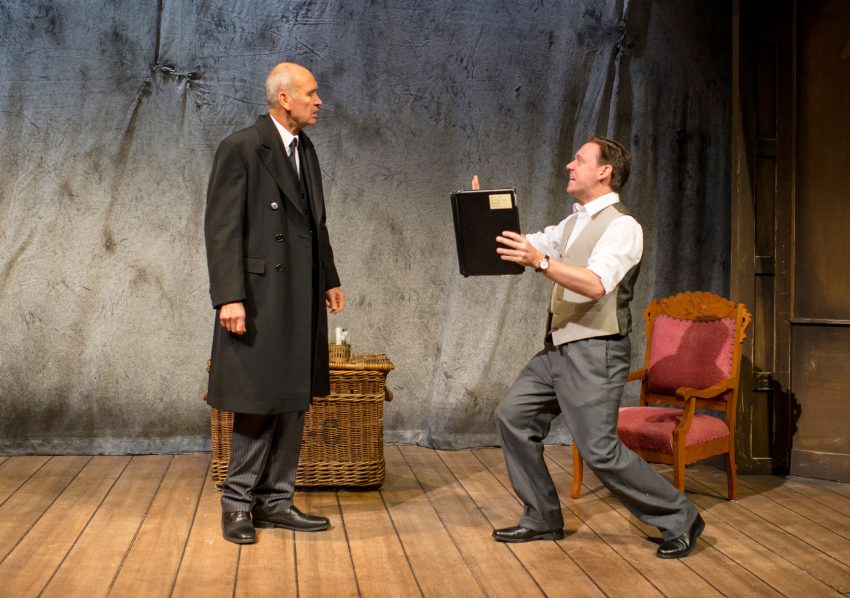 At a time when the world is topsy-turvy and we don’t know when the next unpredictable crisis will flare up, ACT brings us “The Woman in Black” to engage us in cathartic, fun-filled fright.

Based on Dame Susan Hill’s novel and carrying the acclaim of a long running London production, we get to see how a chilling story can work on the stage at ACT, after its New York run.

We are greeted by Designer Michael Holt’s nearly bare stage, with huge, tattered gray curtains covering back and side. All we see is a stool and chair, a movable wicker trunk that serves as a bed, table, storage, and carriage seat. The thin curtain transforms into a veil that reveals second-floor steps and a child’s room—all cast in an eerie blue glow.

We meet tall, thin Arthur Kipps (multifaceted Robin Herford) reading from his journal about a ghostly nightmare that still terrorizes him after many years. We laugh at Arthur’s drab, uninspired reading.

Elderly Kipps decides to hire a young, vivacious Actor (dynamic Antony Eden) to teach him to hold an audience’s attention, as he acts out his horror story. The Actor attempts to infuse dramatic life into Arthur’s performance to no avail.

When Kipps fails at his hilarious acting lessons, they decide to try switching roles. The Actor plays the young Kipps, while Arthur acts the other characters: a helpful citizen, a frightened caretaker, and a caustic carriage driver. Arthur’s reading improves quickly and drastically as he is seduced by acting. He makes each character come to life.

But little does The Actor know what he has taken on with Kipps’ scary story.

An anorexic woman appears sporadically, wearing a ragged black dress and a stark, skeletal face. She is seeking revenge on the town. The Actor becomes frightened when he hears about the Woman in Black’s revenge on anyone who sees her. And The Actor, himself, has truly seen her.

The outstanding sound design by Sebastian Frost sets horses and carriage sounds outside and inside the house. He mimics muttered voices and a train rolling loudly over tracks. A thunderbolt rocks us in our seats. Screeches feel like they are right behind or all around us.

There is a unity in the feelings of fear, anticipation, as well as deafening silence. A strange comfort swells in the shared experience. We hear a communal gasp when the Woman in Black appears, suddenly.

Both actors work in superb syncopation, creating an illusion of movement, petting an invisible dog, and bouncing over bumps in the road.

“The Woman in Black” grips us with storytelling, spellbinding in every scene—a compelling way to release pent-up pandemic emotions. A must see.

“Susan Hill’s The Woman in Black” –based on the novel by Susan Hill, adapted by Stephen Mallatratt, directed by Robin Herford, by American Conservatory Theater, at The Strand, San Francisco. Info: ACT-SF.org – to January 16, 2022.