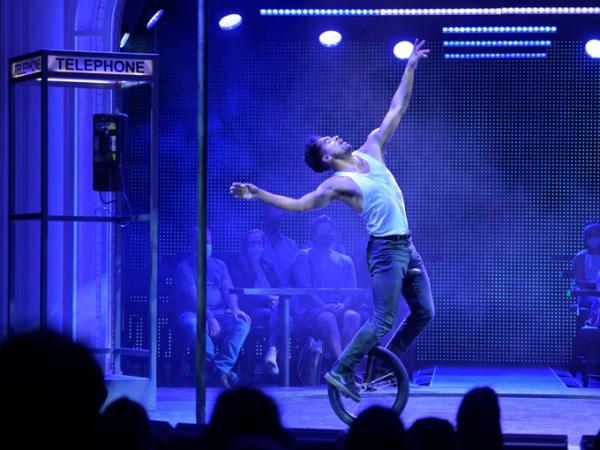 You can only see “Dear San Francisco” at Club Fugazi. Born out of Cirque du Soleil with a dash of “A Chorus Line,” the multi-cultural cast flies up to the rafters and swoops into our hearts.

The nine beautiful young acrobats put their bodies and souls into telling the stories of their lives in the City. In a witty scene, each one takes a turn in a phone booth, talking to friends far away.

As the acrobats roll in and out of the phone booth, they remind us that San Francisco is a place to re-imagine yourself.

Whether they’re gay and coming out of the closet or exploring varieties of sex and gender, S.F. beckons them to fly high. Here at the end of the continent there’s nowhere else to go but UP.

“Dear San Francisco,” a love letter to the City, bring us a sweet circusful of graceful wonders. These young acrobats—from Canada, Hawaii, Australia, China, and two from San Francisco—do triple duty as actors, dancers, and gymnasts. When Ruben Ingwersen rides a tall unicycle around and around the small Fugazi stage at high-speed, it looks like he will spin right off into our laps.

As Enmeng Song from China displays the ancient art of juggling diabolos, a Chinese spinning yo-yo, he performs feats that defy gravity.  Later he juggles hats so fast they look like a blur. You can’t take your eyes off him.

In an ingenious film noir scene, two girls play Sam Spade and a Femme Fatale. They perform amazing contortions while balancing two or three large white balls. It’s hard to tell who is manipulating whom as the balls end up in odd physical locations.

In another incredible scene, the whole gang take turns throwing themselves through the small space of a free hanging hula hoop, squeezing themselves down to the size of an orange. It’s an unbelievable feat of leaping and flying. We’re so close that we almost might catch them as they fly off the stage.

Whether they’re sliding down an impossible pole and saving themselves at the last minute or forming a human pyramid with a one-person handstand on the top, they express the essence of youth, cooperation, and joy.

It takes a hell of a lot of togetherness to work so smoothly as a team, up in the air, climbing each other’s bodies and showing what physical fluidity and beauty can be.

As the team writes challenging words over Junru Wang’s body—”chaos, hate, hopeless”—she responds by slowly raising herself on her hands on tiny little poles.  She balances herself beautifully, wearing these words of dismay, until the team devises an emotional climax.

This is the high-flying spirit of San Francisco brought to us by accomplished acrobats who give their all. They are living their hearts in San Francisco, and making ours beat faster, too. Not to be missed!