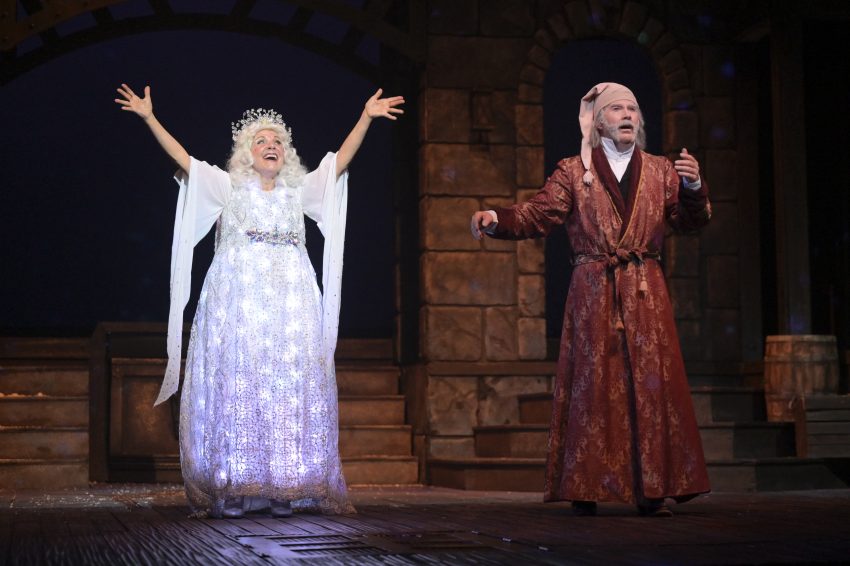 “A Christmas Carol” is everyone’s favorite holiday tradition. Charles Dickens’ classic Christmas tale applies to any time of year, and perhaps more acutely to this pandemic year. Dickens may have been writing about Victorian England, but his picture of poverty and suffering exists just down the street from the Lesher Center, too.

Director Scott Denison has made sure that the actors and the magnificent sets make each scene superb. He even has a quartet of carolers to help set the mood.

The special effects of this lively retelling keep you on your toes, or rather, the edge of your seat. With a ghost popping up from below-stage, explosions of sparkling confetti, and all-encompassing mists, this production makes a singular experience. It’s the show worth seeing this holiday season.

Each set is an ideal backdrop for the actors to make their lines come to life. The gloomy loneliness of Scrooge’s lavish bedchamber makes you believe his exclamation: “I like darkness. It’s cheap!” The spooky portraits above his bed draw our eyes upward, even before Jacob Marley’s ghost erupts from the floor.

Scrooge’s boyhood schoolroom imparts loneliness surrounded by cold. The set for the town utilizes a walkway above the stage, and perfectly captures the merriment of a bright and bustling Dickensian Christmas morning.

Concerned with only himself and his own wealth, miserly Ebenezer Scrooge (Michael Ray Wisely) unwittingly forges selfish links in a chain that will bind him after death. His dead law partner Jacob Marley (Jeff Draper) now haunts him wearing his own self-made iron chains.

Scrooge—even his name casts a shadow of doom—has yet to learn from the eloquent Ghost of Christmas Past (Kerri Shawn) that “the very notion of bounty is a miracle.” Scrooge berates his humble clerk Bob Cratchit (Michael Patrick Wiles), and refuses to share his abundant wealth with the poor and destitute, claiming, “I can’t afford to make idle people merry.”

But even Scrooge transforms himself, strikingly, from a penny-pinching curmudgeon to a giddy gift-giver. Though Wisely easily embodies Scrooge’s cantankerous demeanor, by the end his gleeful excitement is just as convincing.

Wiles’ Bob Cratchit evokes humility and charm—someone you’d like to have as a friend, a neighbor, a family member. His wife Sarah Cratchit (Melinda Meeng) is no less believable. In fact, all the Cratchits are heartwarming and excellent.

The Center REPertory’s “A Christmas Carol” defines what Charles Dickens’ story means. It’s time to alert our Senators and Reps to Scrooge’s conversion, too. It’s a beautifuland timely message for our world full of selfies.