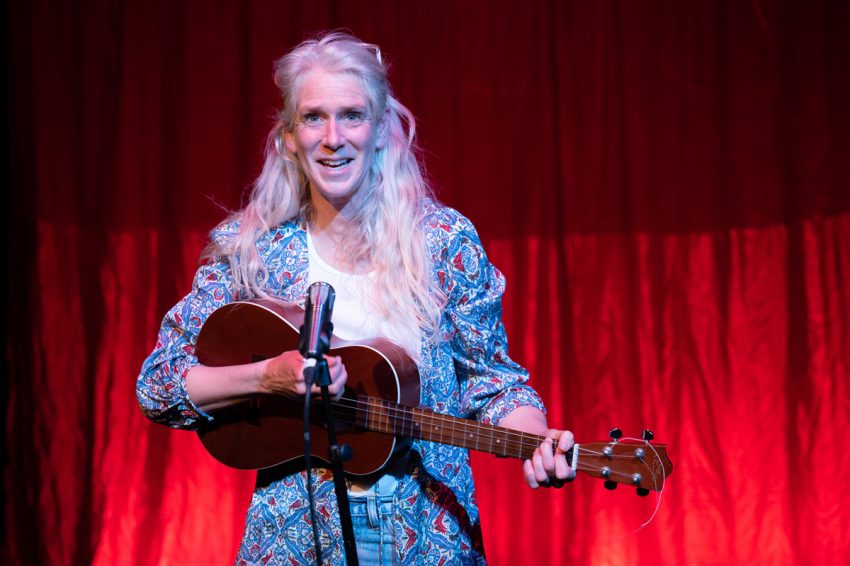 As Reynolds, Wilmurt appears alone in a recording booth struggling with rhythm and tempo.  Wilmurt does a wonderful job acting and singing, recreating one of Reynolds’ final recording sessions with sound engineer Jake Rodriguez urging her on. Placing Rodriguez behind us in the Shotgun playhouse makes us feel part of the action.

Listening to Wilmurt channel Reynolds, we realize that women have still not achieved equality or justice. Reynolds named her recording company Cassandra Records, realizing that, like the Trojan priestess, her message would be disregarded.

Rather than singing Reynolds’ songs as historical memories, Wilmurt sings them as ongoing prophecies. Reynolds warned us in the 60s; now Wilmurt is on a mission to reawaken us to the disasters which still threaten us.

Most of Reynolds’ songs are musically elemental, while at the same time delivering serious warnings about women’s rights, nuclear fallout, and the environment.  In “What Have They Done to the Rain?” Reynolds ridicules the idiocy of atomic warfare. Her song became an anthem for the anti-war movement.

Reynold’s most famous song, “Little Boxes,” which reflects on the “ticky-tacky houses on a hillside” she saw in Daly City, has a nursery rhyme quality. In “Little Boxes,” Reynolds ridiculed post-WWII conformity and regimentation.

“The Cassandra Sessions” leaves me a bit confused. Although I have been a long-time fan of Malvina Reynolds’ songs, as the show progresses, I wonder whether Wilmurt is portraying Reynolds or displaying her own stellar musicianship. As each song takes us to new heights, I settle back and just enjoy the performance.

In her comical banter with recording engineer Rodriguez, Wilmurt gets some humor into her concert. When Rodriguez urges Reynolds to finish up, he dismantles the sound booth as she keeps making changes. They display a charming chemistry, together.

As Rodriguez leaves the studio, in true Hootenanny style, Reynolds refuses to be quiet. She pulls out her ukulele and leads us in a singalong.

Wilmurt’s ground-breaking show reignites Reynolds’ timely anti-war and anti-corporate protests—reminding us how important these songs still are. The play is a work in progress, but highly enjoyable in its present form and well worth seeing.