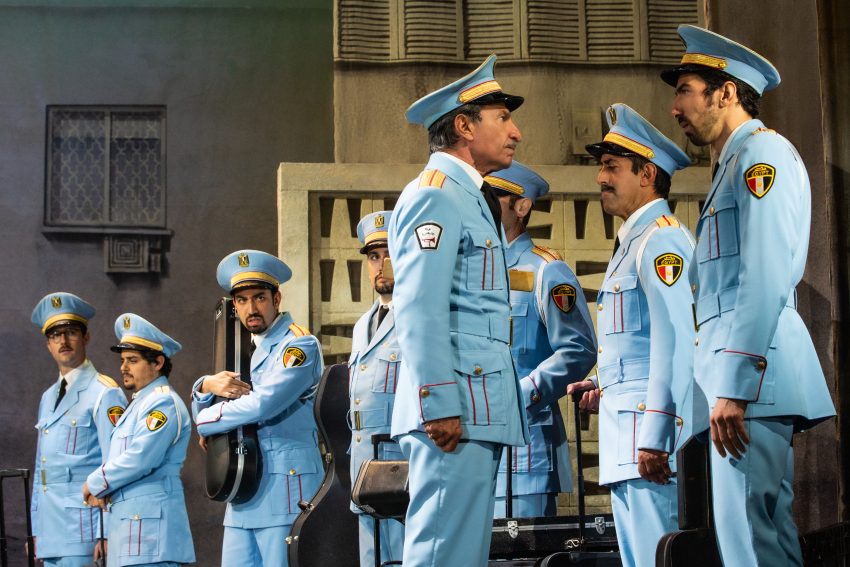 On tour from New York, Broadway SF bring us “The Band’s Visit,” a welcome respite from Complicated Conflicts and Covid. Based on Eran Kolirin’s screenplay for the 2007 Israeli film of the same title, the musical circles the world, bringing a quiet, yet startling message of hope “floating in like the Jasmine wind.”

Due to a funny language miscue, the charming Alexandria Ceremonial Police Orchestra from Egypt ends up stranded in a small, dismal village in the Israeli desert. The Band, a row of eight men in costume designer Sarah Laux’s starched robin-egg blue uniforms, appears in front of a dark, sparsely furnished hotel and café.

The suspicious owner Dina (talented Janet Dacal) informs them there’s no bus till morning. So, the lazy locals burst into a comic song, “Welcome to Nowhere,” describing their town as “boring,” “barren,” “bullshit,” and “bland.” They feel isolated and hopeless.

Vivacious Dina finds rooms for the Egyptians and strikes up a friendship with the older conductor, paternal Tewfiq (formal Sasson Gabay). Dina and Tewfig, both leaders, bond and chat, forgetting the Israeli/Egyptian wars.

Halad also guides shy Pappi (ingratiating Coby Getzug), step by musical step, into the arms of his love interest.  As Haled, Joseph is a stand out in both movement and song. Halad’s fluid gestures bond to the rhythm of the music as we witness small physical changes in Pappi, his hopelessness transforming into expectations.

Scenic designer Scott Pask blends dark, yellow, and sandy desert colors, along with scant furnishings to depict the village’s poverty. His rotating circular stage symbolizes the carousel ride of their routine existence, round and round, as the Israelis fail to capture the golden ring of hope.

David Yazbek’s lyrics and music form the musical’s backbone, holding the poignant plot together, a plot where little happens. The music, from Jazz to Arab, with bongo and violin solos, enhances each characters’ personality. More than the dialogue, the simple lyrics evoke powerful feelings.

Director David Cromer smoothly slips from the dingy hotel to a primitive disco. And, touchingly, one anxious Telephone Guy (Joshua Grosso), stares for days at the outdoor telephone, summing up everyone’s feelings of isolation.

Dacal superbly portrays Dina’s wistfulness. She knows she does not belong there, but will she ever leave? She reminisces in “It Is What It Is,“ singing, “You’ve got your story, you’re in your movie, you are your hero, you think you know.” Dina expresses our feelings of being out of place and disappointed.

What I love most about this musical are the nuances, the subtle distinctions between dreams and realizations. They are all wrapped in our life’s choices, right or wrong, and embedded into daily routine. As Dina sings in “Omar Sharif”: “… but things never change … Nothing’s as surprising as the taste of something strange.”

The all-star, multi-talented cast is spellbinding—a charming evening to relish.

“The Band’s Visit” –music & lyrics by David Yazbek, book by Itamar Moses, based on the screenplay by Eran Kolirin, directed by David Cromer, at BroadwaySF, San Francisco. Info: BroadwaySF – to February 6, 2022.