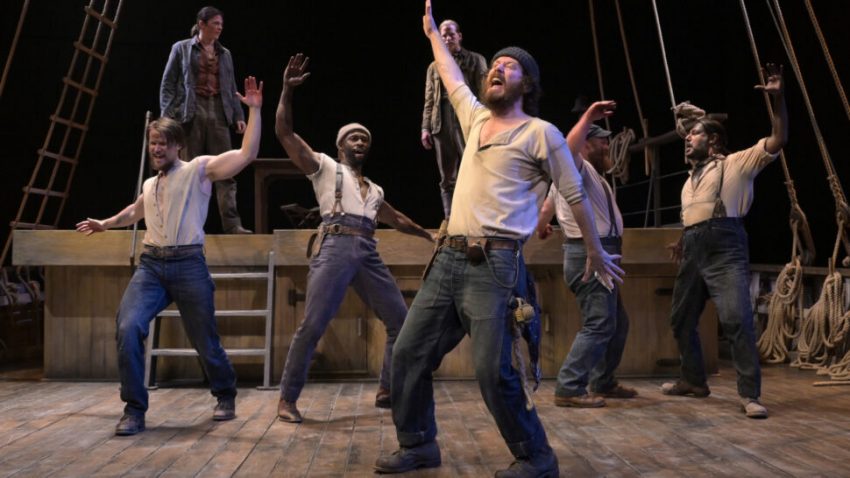 John Logan, Avett Brothers Team Up for a Country Musical

In their 2004 album “Mignonette,” The Avett Brothers sing the fate of a sinking ship. Their new country musical depicts 1880s pioneering American men who are searching for meaning, so they risk work as sailors on one of the last whaling ships.

“Swept Away” attempts to create a Christian fable from New England history. The show wavers between sea story, horror tale, and myth.

The first half tells a familiar story of macho whalers in the dying whale trade, proud of their bravery, but nasty and rude. The second half unearths the true story of a horrible shipwreck and what happens to the four survivors.

Instead of names, the four main characters are called Mate, Captain, Little Brother, and Big Brother—turning this history-based horror story into a Biblical parable.

Designer Rachel Hauck’s set morphs from a dying man’s hospital bed into a magnificent wooden-hulled sailing vessel. With muscular sailors dancing on the sturdy deck, the ship embodies the rough life of men at sea.

But in the inevitable storm, the wooden whaling ship rises slowly into the air to hover upside down over the sea, taking our breath away. As we gaze up at its cross-beamed and mirrored wooden hull, the ship becomes a spectacular vision. Hauck’s ship and Kevin Adams’ lighting make a magnificent display, and we realize how, in a flash, the world can go topsy-turvy.

After the shipwreck, writer John Logan and director Michael Mayer take us on a gripping psychological and spiritual quest, adding an undertow that questions our ideas about “identity” and “freedom.”

A terrible struggle looms between the cynical whalers and idealistic farmers. The sailors scowl at the newly arrived farm boys, Little Brother (Adrian Blake Enscoe) and Big Brother (Stark Sands), who preach the old-time religion. Clinging to their dying trade, the whalers scoff at the idea of Christian redemption.

The Devil and God are at war in the shocking climax.

Adrift in a beautiful lifeboat, the second half shocks and surprises. Yet Mate breaks the fourth wall and asks us, “What would you do?” relishing his role as Narrator. Forlorn Mate refuses to abandon the old way of life, ending with the dynamic song “Satan Pulls my Strings.”

If you enjoy country music, first-rate acting, and out-of-this world design, “Swept Away” is worth the voyage.