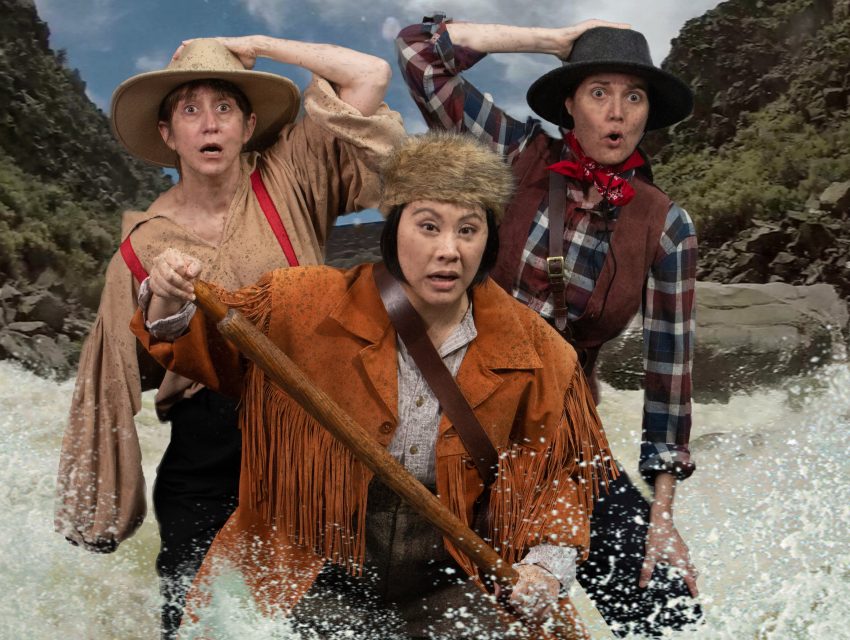 Sarah Bernhardt did it playing Hamlet. Tony Curtis and Jack Lemon did it to infiltrate an all-woman band in Some Like It Hot. Shakespeare’s pals played the roles of women in his plays. It’s called Cross-dressing. It’s also called acting.

Playwright Jaclyn Backhaus has an all-woman cast play decidedly historical male roles. Her women dramatize the ten men in the John Wesley Powell’s 1869 travel journal. Powell, a one-armed Civil War veteran is the self-styled “discoverer” of the Colorado River and the Grand Canyon. Of course, he doesn’t  count the Native Americans who were already there for centuries.

The women strike exaggerated macho poses and spout rough talk, standing in for Powell’s 1869 male explorers. They sport faux buckskins and the remains of Civil War uniforms—in a display of woman power.

Backhaus’s slapstick women mock male posturing: they stomp their feet and shout as they shoot the rapids. With a womanly wink, they play all the men’s roles, ridiculing the strictly white male version of U.S. pioneer history.

Scenic Designer Heather Kenyon does a lot with little, using jagged wood panels of red, ochre, and orange for the canyon walls. The women put tremendous energy into maneuvering the boats—with ingenious and intriguing staging by Director Lee Ann Payne.

Payne uses witty choreography for the white-water rapids, rocks, and waterfalls. The humor often reminds me of the “Silly Walk” skit from Monty Python’s Flying Circus.

John Wesley Powell (steadfast Mary Melnick) and his mates William Dunn (comic Melissa Jones) and John Colton Sumner (comradely Patty Reinhart) are determined to put their own names on grand geographic wonders on their route down the Colorado. Talk about overblown male egos!

We laugh at their macho narcissism. The native Utes they encounter—who have been there, done that—could set them straight about “owning” Nature.

The intrepid women start out with four boats and end up with three. After the first stage of their grueling journey, Englishman Frank Goodman (charming April Culver) politely departs the adventure. He has had quite enough of Powell’s reckless “heroism” and gambling with lives.

The remainder of this famous crew is looking at heavy rapids, looming canyons,  and dwindling food.  Facing dangerous territory ahead, more explorers jump ship. Some choose survival over heroics.

When their boats capsize, it takes a toll on their provisions. Quartermaster Hawkins (energetic Katie O’Bryon Champlin) does everything in his power to make a meal out of an apple and a little flour. For comic relief when the resting crew encounters a rattlesnake, hilarious Hawkins beats the snake with a coffee pot. Now they have something to eat.

Why does Backhaus choose to tell Powell’s story rather than stories of the many female explorers?  British Gertrude Bell, Isabella Bird, and Beryl Markham, the first woman to fly solo—east to west—across the Atlantic, have women’s stories to tell. And they did it mostly alone. No crew. And so far as I know, they didn’t name anything after themselves.

Ladies, you don’t have to pretend to be men. You’re better than that.

“Men On Boats” by Jaclyn Backhaus, based on the journals of John Wesley Powell, directed by Lee Ann Payne, scenic design by Heather Kenyon, at Palo Alto Players & Online. Info: PaloAltoPlayers.org – to February 20, 2022.