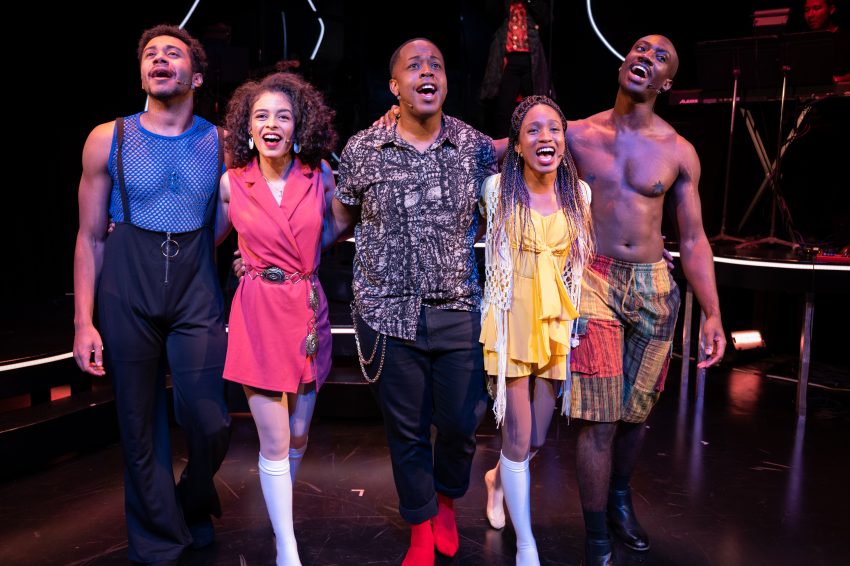 We are greeted by the Narrator (dynamic Albert Hodge), Youth’s older self, standing high above the stage—a ringmaster announcing each spectacle. Hodge welcomes us with a booming lyrical song outlining his madcap musical journey:  “Catch the song to know what it’s all about.”

Hodge asks questions and directs the actors, providing unity, and interweaving humorous reflections. “Imagine,” he states, “an adult’s life decisions made by a stoned teenager.”

We are drawn into designer Romello Huins’ mysterious, multi-level stage edged in white neon light. When the band enters, led by Music Director Daniel Alley, they pull us into an electric kaleidoscope of sounds: acid rock, gospel, and jazz fusion. The audience responds by clapping to the beat of their rhythm.

After he hears the gospel song “Church Blues Revelation,” Youth is transformed by Music. He begins an existential journey in his search for “the real,” as the ensemble sings, “Something Real Goin’ Down.”  The Narrator explains, “Music causes the fusion of the real.”

Youth leaves the church, his band, and his mother to fly to Amsterdam. His disappointed mom (talented Rolanda D. Bell) commands the stage with exuberant singing and exceptional acting. Tears run down her cheeks when she asks when he will visit her. Bell forges a powerful moment, making time stand still.

Youth’s feelings reflect the challenges facing young adults, today. His music spotlights the roller-coaster of his emotions. After drug-induced adventures in Amsterdam, they sing “Everything’s Alright,” as he learns to wear his body. “We Just Had Sex” embodies the young adult who mixes contradictory urges, craziness with love.

The magical mystery tour ends in Germany, at a “May Day” protest. Youth feels at home with the poor performance artists, so he lies to become one of them. With a bouncy Broadway tune, he pretends to be a ghetto kid.

By following Stew Rodewald’s lyrics through this revealing madcap memoir, we understand how Youth’s journey fuses with his art. And his journey ends with a surprise.

“Passing Strange” sparkles with the talents of Angel Adedokun, Chanel Tilghman, and Myles Brown, wearing varied characters with confidence. Director Hodgson sets the actors for success by showcasing their personalities with dances and songs in multiple roles. Shakur Tolliver shines as Venus in Germany and the Pastor’s son.

For me “Passing Strange” is a personalized rock musical with a young man’s incredible journey sewn into each note. For others, it might be a young man’s psychological journal of self-discovery—with backup music and lyrics strewn among the pages.

Either way, “Passing Strange” takes us on a surreal, self-defining trip. Enjoy the ride!