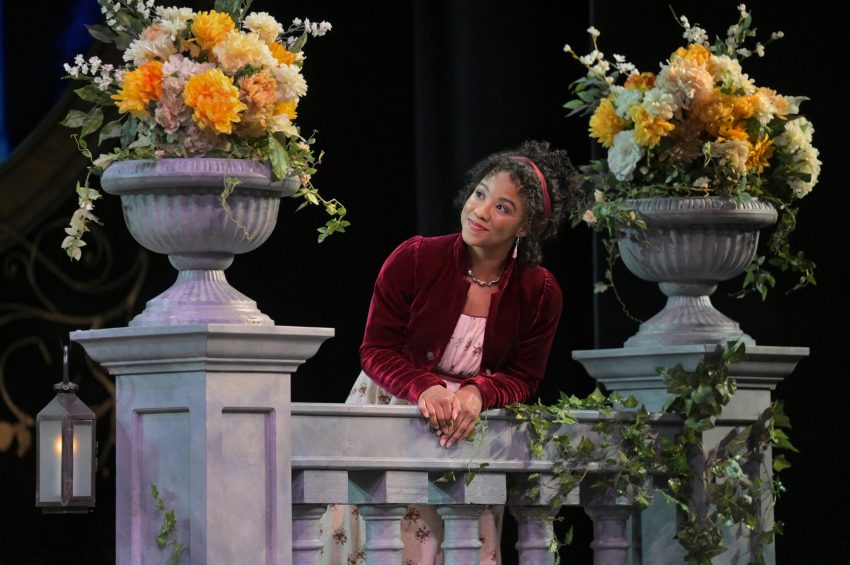 I remember spending days holed up in my room with Jane Austen’s Sense and Sensibility as the novel unfolded. So, I was excited when I heard that TheatreWorks would bring Austen to life as a musical. How would a musical deal with the breakout Dashwood sisters?

Director Robert Kelley’s “Sense and Sensibility” indulges us in a fantastical escape from modern life. Kelley fashions a harmonious fusion of comedy and musical that leaves us laughing and thinking.

Kelley transports us to the lush gardens and elegant rooms of Romantic England, with golden borders framing the stage, a charming and elegant Austen world. Kelley dresses the stage lavishly—a painting come to life.

Fanny lives and breathes high society, using people as pawns to boost her status. Fanny is the original Mean Girl we all love to hate.

When your future hinges on a favorable marriage, how can any woman acquire power or agency?  Yet, the Dashwood sisters carve out paths for themselves, as they risk falling down the social class ladder into poverty. Sound familiar?

It’s a time when a women’s success is narrowed down to a “good” marriage. The only way both sisters can have their ‘happy’ ending is by securing an engagement. And the men they fawn over present new obstacles. How to fight rules stacked against women?

Shy, awkward Edward Ferrars (sprightly Darrell Morris Jr.), a love-struck puppy with a terrible secret, would like to woo Elinor.  But Ferrars would prefer a pit of fiery coals to confessing his love. We fear that sensible Elinor, who suppresses her emotions, will choose self-sacrifice.

But Marianne, a feminist forerunner, breaks the mold for women. She speaks her mind and openly expresses her affection for Mr.Willoughby (dashing Hunter Ryan Herdlicka). Marianne and Willoughby walk arm in arm, reciting poetry!

Marianne goes crazy for Willoughby—the only word that escapes her lips is: “Willoughby.” I felt myself hating the name. Although Willoughby’s youth and liveliness pair well with Marianne, his ambition and selfishness lead him to an unforgivable act.

Colonel Brandon (hypnotic Noel Anthony), singing “Wrong Side of Five & Thirty,” laments his rejection by Marianne. Anthony gives me goosebumps as he belts out his feelings. Magically, his words transform him from an “old man” to the embodiment of suffering desire.

As a man who has suffered at the hands of the patriarchal system, Brandon becomes an “accidental feminist.” Brandon is the only male who gives his love interest a choice. Rather than pressuring Marianne, he offers the quiet support of an ally.

Manipulated as we are again by self-centered corporations, it’s no wonder we may see a way out through Elinor’s “sense” or Marianne’s “sensibility.” The Dashwood sisters show the way—with style.