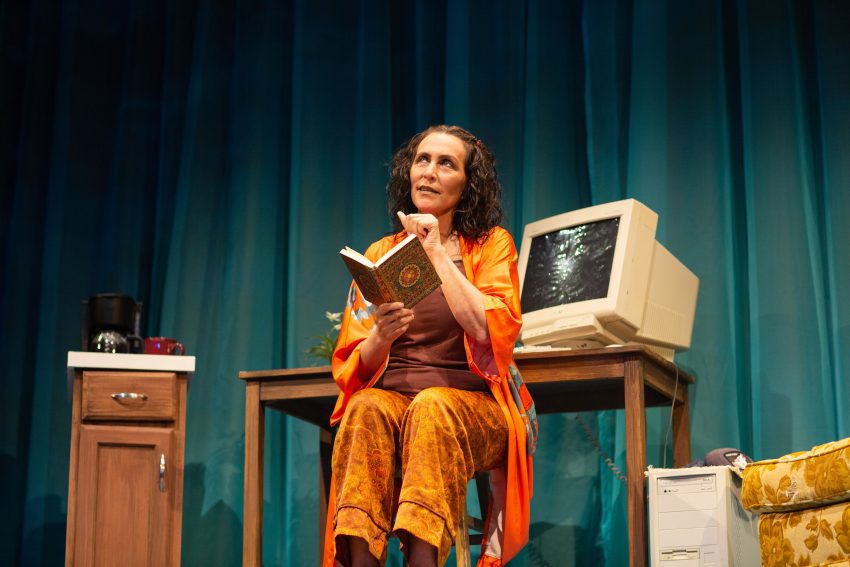 The title “Water by the Spoonful” comes from a doctor’s advice on how to give a dehydrated child water—slowly, over many hours. Maybe we can tackle our national drug problem one spoonful at a time, too . . .

But an addicted mother cannot muster the patience to give her children water every ten minutes—and she pays a lifelong price, losing a child and alienating another. Playwright Quiara Alegría Hudes forges a link between drug addiction and public addiction to greed and war. Hudes notes how our personal and political lives mingle—a unique poetic achievement. And the superb cast makes each character indelible.

“Water by the Spoonful” is two plays combined into one. It’s the story of Odessa Ortiz (unforgettable Lisa Ramirez), a crack addict who runs an online chatroom for recovering addicts. Odessa abandoned her son Elliot (powerful Xander DeAngeles), now an Iraq War veteran with PTSD. Elliot is angry and estranged.

As Odessa, Ramirez delivers a deeply moving performance as a degraded addict, missing her son, living alone. Online, as “Haikumom,” she specializes in “tough love” for other addicts. Ramirez’s face reveals the pain of a mother who was forced to abandon her child. With first-rate acting, Ramirez travels emotionally from regret to despair to hope.

Odessa reveals that she’s been trying to recover from crack for seven years, with hundreds of relapses. Her words strike to the heart, exposing the deep inequalities in the U.S., one of the most addicted countries. Odessa runs the addiction chatroom like a hotline, as the four crack addicts talk online with brutal honesty.

And volatile Ben Euphrat plays the assertive start-up dude called “Fountainhead.” The growing affection between these addicts reveals their rocky, but possible path to recovery—through real empathy with each other.

De Angeles beautifully embodies Elliot’s vulnerability as he argues, suffers, and hopes, in a nuanced performance. We hurt with Elliot as he competes with Odessa’s online family. Suddenly, Elliot is thrust back into the war in sudden, unexpected flashbacks. In a striking dreamlike Dance of Death with a ghostly Iraqi (graceful Salim Razawi), DeAngeles beautifully embodies Elliot’s contradictions.

Meeting online, the addict group taunts Fountainhead (volatile Ben Euphrat), who reveals how the “American Dream” led to his addiction. Odessa counsels Fountainhead: “So, stop being a highly functioning isolator, and start being a highly dysfunctional person.” Later, when Fountainhead gets down alongside a bathtub to nurse the nearly dead Odessa, he also begins his own salvation by caring for her, selflessly.

“Water by the Spoonful” lyrically intertwines family feelings with social truths. Hudes supplies a dramatic look into the afflicted heart of our country. The play, part of a meditative trilogy, takes a step toward prescribing how to take our “water by the spoonful,” to find a cure for our walking wounded, through selflessness.