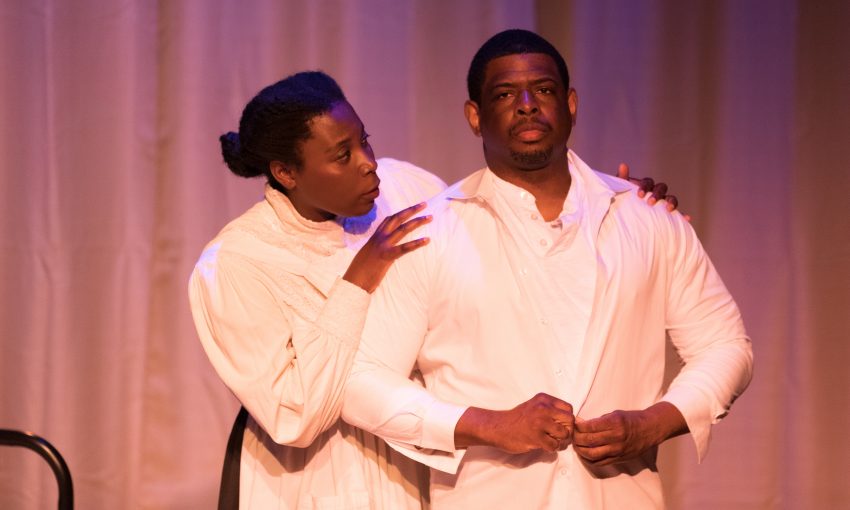 In 1905 New York, Esther (dynamic Jeunée Simon), an independent businesswoman and talented seamstress, creates lovely intimate apparel for the Fifth Avenue wealthy. Esther is strong and proud. But other women in the boarding house are married now, and she longs for the love of a husband.

For years, Esther saves her earnings, dreaming of opening a beauty salon for Black women. Generously, she sews the finest form-fitting corsets for her friend Mayme (talented Jasmine Milan Williams), a prostitute. I was touched by Esther and Mayme’s affectionate friendship: they sing and dance like forever best friends. They giggle. Their delightful sisterhood steals the show.

Esther, who loves the feel of fine fabrics, like Japanese silk and Scottish wool under her fingertips, services elite customers like Mrs. Van Buren (Kim Saunders). Mrs. B. bares her soul as Esther covers her skin with meticulously sewn undergarments. But the white client jumps back when Esther touches her. Esther responds: “Afraid the color will rub off on you?”

Both women seek the love of a kind man who will help their dreams come true. They would give him their hearts.

Through Esther’s pastor, Jamaican farmer George Armstrong (soft-spoken Khary L. Moye) sends flowery letters, seducing her into marriage. We sympathize with George because he is working like a slave digging the man-killing Panama Canal. There, the workers watch “the death train pass 5Xs a day.”

Meanwhile, Esther and her Jewish fabric salesman Mr. Marks (intense Samuel Vegas) render the most touching scenes in the play. Their intimacy and love of fabric overflow with words like “fine” and “delicate,” expressing their mutual adoration. But in 1905, religion and race separate them.

Because Esther cannot read or write, her friends delight in writing her love letters to George working on the Canal, and reading his replies to her.

Act One moves slowly, ending with Esther’s marriage to George. She wears a dress from a fabric gifted by Mr. Marks. I wanted to toast her wedding with them.

In Act Two, the pace picks up as Esther and Mayme’s relationship is tested. Both women wind up bearing the same burden and the same anguish.

We discover that George, too, had someone read and write his letters for ten cents a post.  Esther and George prove to be radically different than their letters, creating a rocky road for their marriage.

Lynn Nottage blesses us with lyrical language, like the moving monologue by Mrs. Dickson (Marjorie Crump Shears), Esther’s motherly landlady. She advises Esther to work on her art and keep her hands delicate, not like women who clean houses. She counsels Esther: “Give no part of your heart, without getting a piece of his.”

Esther learns her self-worth and identity are not tied to marriage. In “Intimate Apparel,” Lynn Nottage beautifully portrays longing, and the need for supportive sisterhood.